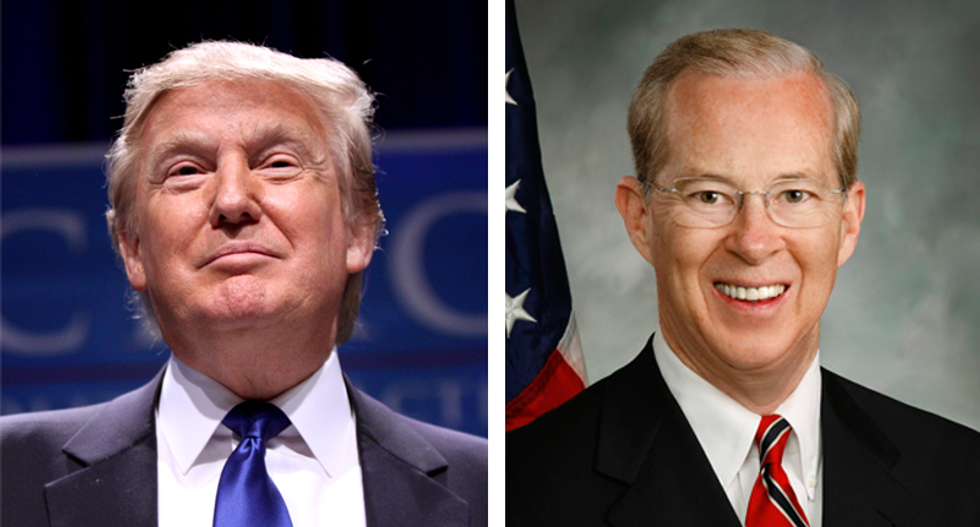 Dana Boente, the new general counsel to FBI director Christopher Wray, has served in multiple positions since Donald Trump took office, raising questions about his appointment to the top law enforcement agency in the United States.

As the Washington Post reports, Boente on Tuesday was named the replacement for James Baker, who was “reassigned” within the FBI in December 2017. Boente's appointment comes amid reports FBI director Wray threatened to resign after he was pressured by Attorney General Jeff Sessions and the president to "clean house" of FBI officials deemed loyal to former director James Comey.

Despite Wray’s reported stand against Sessions and Trump, the news of Boente's appointment would seem to indicate the FBI head is bowing, at least symbolically, to arm-twisting from the president’s team.

Boente is hardly a bit player in the unfolding Trump-Russia saga. In fact, the newly-appointed FBI general counsel has served in five different positions since Trump took office, all of which played critical roles in the ongoing Russia investigation.

Boente was originally appointed as the US attorney for the Eastern District of Virginia by former president Barack Obama in September 2013. In January 2017, a week before leaving office, Obama quietly signed an executive order that inexplicably removed Boente from Department of Justice’s line of succession and removing him from the list of people to succeed the attorney general.

As RawStory reported, shortly after the president's inauguration—and the same day Sessions was sworn into office—Trump signed an executive order reversing Obama’s decision.

Boente would later be named acting attorney general by Trump on Feb. 9, after the president fired Obama holdover Sally Yates. In firing Yates, Trump citied her refusal to defend his immigration ban. According to Yates’ own Congressional testimony, she had also been working with the FBI behind-the-scenes to warn the president that then-national security Michael Flynn was compromised by the Russians.

Rosenstein took over the Russia investigation and played a key role in the Trump administration’s preferred narrative about the president’s decision to fire Comey. The deputy attorney general drafted a memo that detailed criticism against the FBI director, which members of the Trump administration maintain was the reason the president fired Comey. Trump himself has admitted he did so to relieve “pressure” from the Russia investigation—and that he was going to fire Comey anyways.

In October 2017, Sessions abruptly asked Boente to step down as a U.S. attorney general for the Eastern District of Virginia. That decision came as a surprise. Just seven months before, in March 2017, Sessions had requested the resignations of the remaining U.S. attorneys who had been appointed by Obama. Trump declined to accept the resignations of two Obama-era appointees: Rod Rosentein and Dana Boente.

Despite resigning as the the U.S. attorney general in October, Boente was able to remain as acting assistant attorney general of the national security division, a top DOJ position, until Trump's nominee was confirmed.

Boente remained in that role ostensibly until Tuesday, when he was named the FBI's general counsel—where he'll provide legal advice to DOJ’s investigative arm, and further entangle himself in the Trump-Russia saga.