Bush ethics czar Richard Painter: 'This isn't about ideology -- this is about the mental condition of the president' 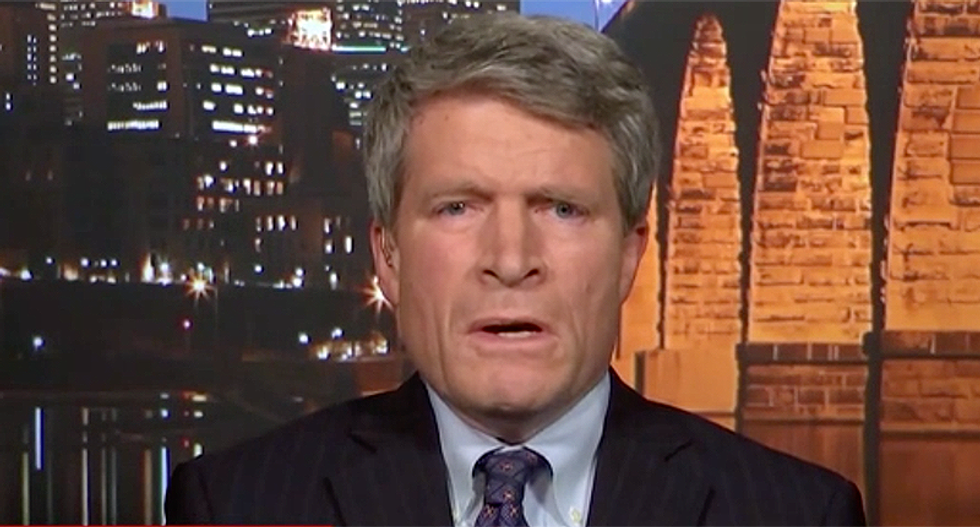 Richard Painter, the former ethics czar for George W. Bush, lost it when talking about his concerns over President Donald Trump's leadership in the White House.

During a Wednesday interview with MSNBC's Brian Williams, Painter responded to the infamous New York Times op-ed alleging the cabinet thinks their president can no longer fulfill his oath of office.

"Well, this is a Constitutional crisis," Painter said. "And it's not about being a conservative, as is the author of this piece in The New York Times, or a liberal or a moderate such as myself. This is not about ideology, it's about the mental condition of the president of the United States. He is not mentally fit for office. Those around him know that and this is not the first time we've heard this."

He brought up an op-ed he penned with psychologist Leanne Watt, Ph.D. about the 25th Amendment and the need to invoke the law to protect the country.

"There are those around the president who know he's unstable," Painter continued. "It's been reported multiple times in books and articles in the press. This is a very dangerous situation. Every day this man remains in office, we're putting our children's lives at risk, our grandchildren's lives at risks, the future of human civilization because he controls nuclear weapons. This is a dangerous situation."

He explained that Trump's reaction to the op-ed reinforces the danger of the situation.

"He says it is treason for someone to criticize the president of the United States," Painter continued. "Well, that's not the definition of treason. Perhaps collaborating with a foreign power to obtain the presidency, that might be treason, but not criticizing the president of the United States. He demands that the newspaper hand over, that The New York Times hand over the name of this. For what, so that he can be prosecuted?"

Painter went on to say that Trump is acting like a dictator and reinforce his opinion that Trump is a "very dangerous man." He said he wanted to repeat the importance of the idea that this unstable leader controls nuclear weapons.

"He cannot allow him to remain in office," Painter cautioned. "We're taking a great risk with him there and it's not about being a Democrat or Republican. It's the Republicans who should take him out right away and put in Mike Pence. I don't agree with Mike Pence about a lot of things, but it's the Republicans who are going to pay the price for this in November and, indeed, if this man is in control of nuclear weapons and he is -- does something rash, we could be in very, very serious trouble. This is about all of us. Once again about human civilization and our future on this planet. We need Donald Trump out of office now."