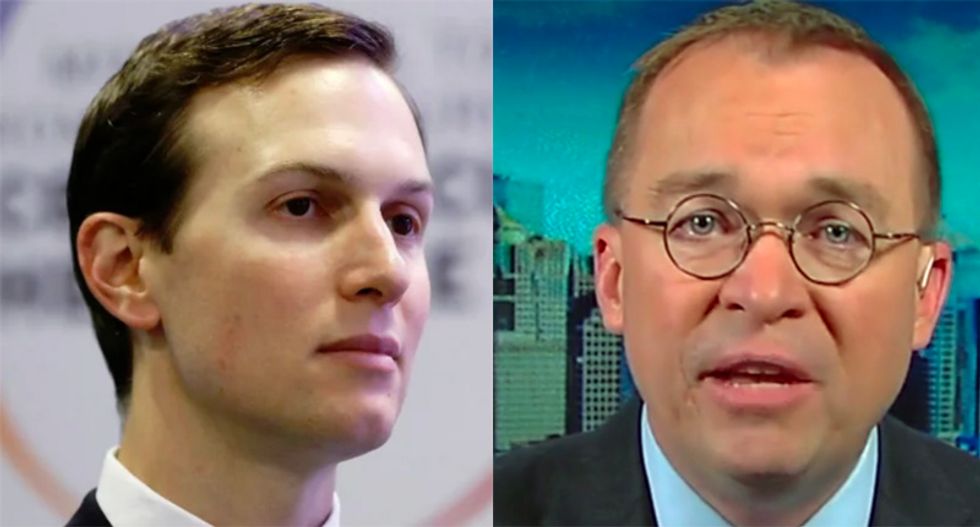 Following what turned out to be another disastrous performance by acting White House chief of staff Mick Mulvaney on Fox News on Sunday, Politico is reporting that his tenure serving Donald Trump may be coming to an end now that Trump son-in-law Jared Kushner is turning against him.

On Sunday Mulvaney curiously decided to appear on "Fox News Sunday"with combative host Chris Wallace to defend his quid pro quo comments he made in a press conference where he all but admitted that the White House was asking for dirt on political opponents in return for foreign aid. Mulvaney's off-hand remark that Trump views his first job as being in the "hospitality business" to defend his G7 Doral decision then made the situation worse.

All of that has set off a flurry of rumors the Mulvaney is on the outs -- possibly permanently.

According to Politico, "Mulvaney fumbled during an interview on 'Fox News Sunday' when he cited two reasons for the delay, whereas he had listed three during his Thursday news briefing at the White House. He continued to blame reporters for any misunderstanding, a feat that can be tough to pull off when his answers were all delivered on camera and when the host, Chris Wallace, let the tape keep rolling."

The report notes that "Mulvaney’s interview did not play well among Trump allies and advisers, with one calling it a 'self-immolation.'"

Making things worse is that Mulvaney's standing with Kushner has gone further south, with the Trump adviser growing increasingly unhappy with how Mulvaney has done his job.

"One former administration official called it one of the White House’s worst weeks during Trump’s presidency, and aides and allies started to contemplate the length of Mulvaney’s tenure in the West Wing," Politico reports. "In recent months, Jared Kushner, the president’s senior adviser and son-in-law, has grown fed up with Mulvaney at various points and has spoken poorly of his laissez-faire management style, one Republican close to the White House said. At first, Kushner was quite pleased with Mulvaney’s hands-off approach because of its departure from the tense reign of Gen. John Kelly, Mulvaney’s immediate predecessor, and because it allowed Kushner to operate freely. Yet that sentiment has waned in recent months, the Republican said, as the White House has started to feel more chaotic."

The report goes on to note that Mulvaney might hang on because the White House is unsure whether there is anyone who would take the job should Mulvaney get the boot.