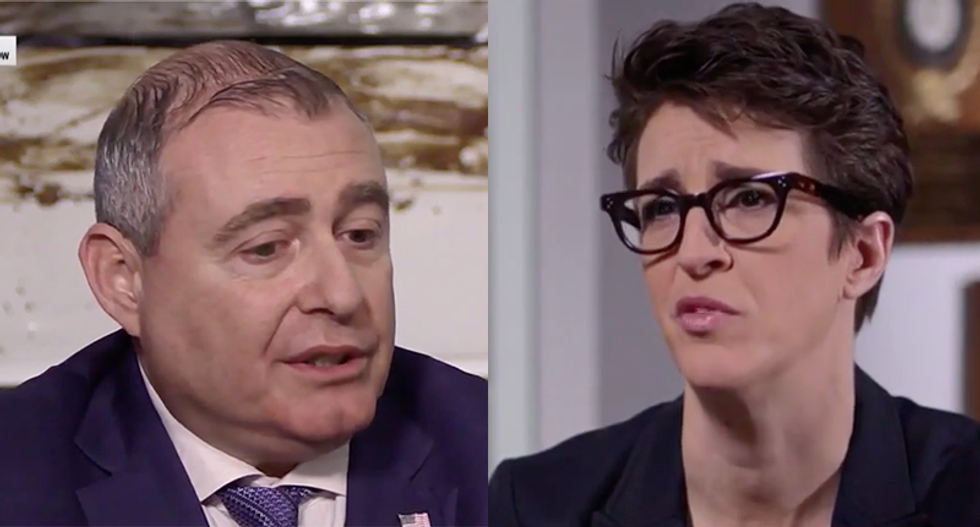 Lev Parnas has already set President Donald Trump's world on fire by releasing a dank stash of documents he acquired while working with Rudy Giuliani on an international conspiracy. In an MSNBC interview Wednesday, Parnas told Rachel Maddow that Trump was very well aware of what was going on and he and Giuliani were the sign-offs on "everything."

Maddow has become an expert on Parnas and his associate Igor Fruman, who were the targets of her latest book, Blowout: Corrupted Democracy, Rogue State Russia, and the Richest, Most Destructive Industry on Earth, which was released Oct. 2019. She explained at the time that she never anticipated the subjects in her book would become such a critical piece of the president's impeachment, she merely found the bizarre links fascinating and began to research the links.

During her interview, Maddow was expected to ask whether an exchange with Republican congressional candidate Robert Hyde really did have people tracking and following former Ukraine Ambassador Marie Yovanovitch, as he claimed on WhatsApp messages.

Parnas revealed that during phone calls between Rudy Giuliani and the president, Parnas was with Giuliani on the golf course. Giuliani would then put the phone on speakerphone and Parnas could overhear what he was saying. In one call, he explained that he heard Trump screaming at Giuliani because of something Giliuani did on television.

While in Ukraine, Parnas said that Giuliani instructed him to "crank up the pressure on Ukraine" to demand that they announce an investigation into former Vice President Joe Biden. If they didn't abide by the "threat," they would get "no aid." Further, if he didn't announce the investigation, then Vice President Mike Pence wouldn't attend the Ukraine inauguration, and in fact, no U.S. officials would attend.

The following day, Pence announced he would not attend the inauguration.

Parnas then messaged his contact person in the Ukraine government, who ultimately disconnected their WhatsApp connection. Giuliani told Parnas "well, they'll seem," meaning if they didn't agree to Trump's terms there would be repercussions.

Giuliani then told Parnas that the reason that Trump didn't go to Poland where he was supposed to meet with the Ukrainian president was that the announcement hadn't been made for the Biden investigation. Trump canceled the trip saying it was because of the hurricane, but Parnas said that wasn't the case, according to Giuliani.

Instead, John Bolton went to Poland on Trump's behalf. "And he has a lot to say," Parnas said, noting he wouldn't talk for Bolton, but that he would have a lot of information about the specifics.