'Anybody got a bazooka?' Proud Boys wreak havoc on DC as Mike Flynn and others rally Donald Trump loyalists 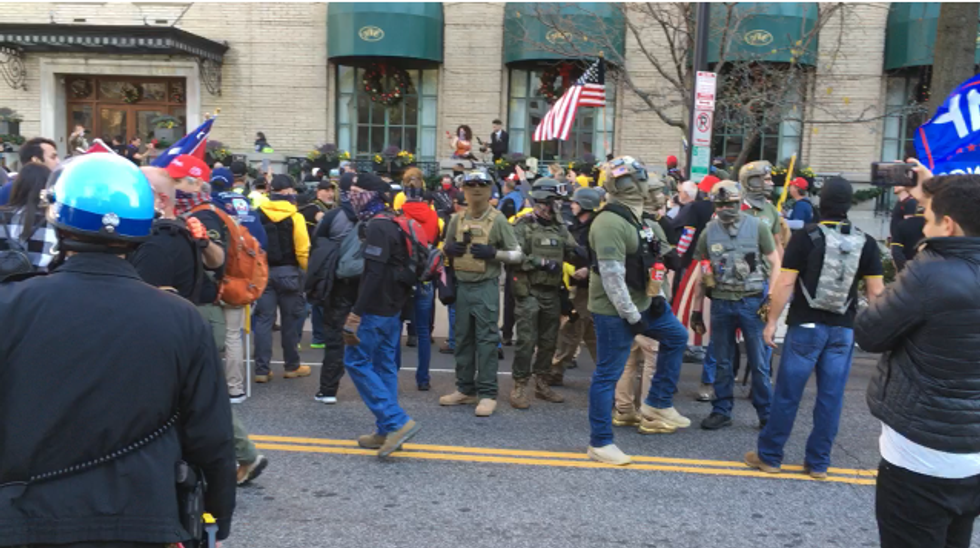 Fueled by the words of retired Lt. Gen. Michael Flynn, conspiracy-monger Alex Jones and other luminaries of Trump-sphere, thousands of Trump loyalists poured into Washington, DC on Saturday, pledging defiance to an orderly transfer of presidential power and looking for opportunities to clash with antifascists.

Police blocked off the streets several blocks back from the National Mall and Freedom Plaza — the two focal points of the Trump rallies — causing traffic to snarl and impeding ambulances from passing through.

Flynn, who served as Trump’s first national security advisor and who received a pardon from the president after pleading guilty to the crime of lying to the FBI, was one of several speakers who described the effort to overturn Joe Biden’s election as a “spiritual battle” at the event dubbed “Stop the Steal” and “Jericho March.”

As President Trump buzzed over the National Mall in Marine One, Flynn lambasted the news media, echoing his former boss’ scorn.

Another speaker, conservative radio host Eric Mataxas, also engaged in media demonization. Spotting another helicopter prior to Marine One, he said, “That’s the media?

We need to shoot that down. Anybody got a bazooka?” 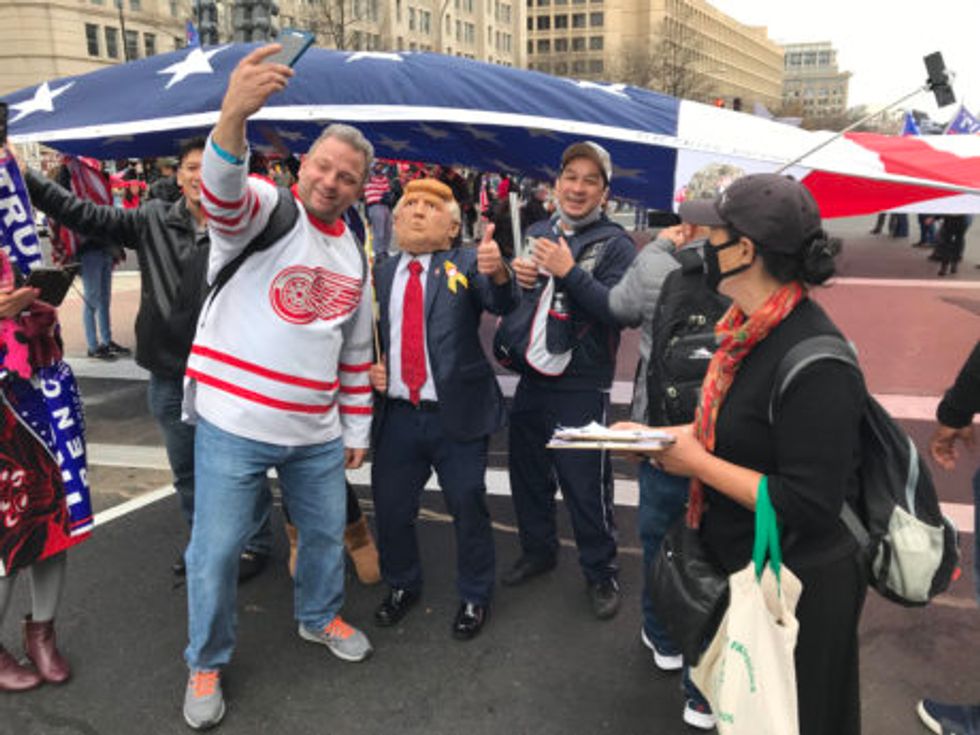 Weaving together the martial religious language of the Old Testament with Trumpist conspiracy-speak, Flynn concluded: “I’m gonna use a metaphor, because Jericho — we’re inside the walls of the Deep State. There is evil and there is corruption, and there’s light and truth. We’re going to get to the light and we’re going to get to the truth. And us inside of this barricade, we’re gonna knock those walls down.”

Earlier this month, Flynn retweeted a press release calling on Trump to declare martial law and temporarily suspend the Constitution and civilian control of the elections, and have the military oversee a new election. Flynn signaled his approval with the hashtag #WeThePeople. And in an essay published on Thursday, Flynn characterized the incoming Biden administration as “tyrants” whose plan is “to eliminate dissent, subdue any criticism, and outlaw those who do not submit unconditionally to the dictatorship of the New World Order.”

Aside from a few tweets expressing gratitude to his supporters, Trump’s Twitter feed on Saturday featured a stew of resentment at various actors that have refused to cooperate with his scheme to overturn the election: The Supreme Court (for declining yesterday to consider a challenge filed by the Texas attorney general), the Republican governors in Georgia and Arizona (for affirming their states’ electoral votes for Biden), and Attorney General Bill Barr (for not speaking publicly about a purported investigation into Hunter Biden).

Sebastian Gorka, a podcast host and former White House strategist under Trump, swatted aside his former boss’ continued failures to get traction in the courts to overturn the election during a speech at a separate March for Trump rally organized by Women for Trump organizer Amy Kremer.

“Let’s be very clear,” Gorka said. “The first thing I said last night when I heard the decision: ‘Stop. Take a deep breath. Count to ten. Read the Bible and pray. Because we are on the side of truth.’”

Back at the National Mall, Alex Jones of InfoWars, pledged unyielding resistance to a Biden administration.

“We will never back down to the Satanic pedophile globalist New World Order and their walking-dead reanimated corpse Joe Biden,” he said. “And we will never recognize him…. So, I don’t know who’s going to the White House in 38 days, but I sure know this: Joe Biden is a globalist will be removed one way or another.

Trump supporters carrying American flags roamed in small bands between the National Mall and Freedom Plaza throughout the day. Supporters held a giant American flag on Pennsylvania Avenue outside Trump International Hotel, and enthusiastically posed for selfies with a Trump impersonator. Dozens of Proud Boys in tactical gear massed outside Hotel Harrington in the morning and roved through downtown.

In the early afternoon, Proud Boys knocked a man to the ground and began punching and kicking him on the National Mall near the Washington Monument, according to video showed on Twitter. Witnesses described an altercation involving Proud Boys in front of the Army Navy Club on 17th Street. Police completely blocked off Black Lives Matter Plaza to keep the Proud Boys and antifascists separated. Video shared on Twitter shows the police using a chemical spray on Proud Boys seeking to antagonize antifascists.

This story is developing.