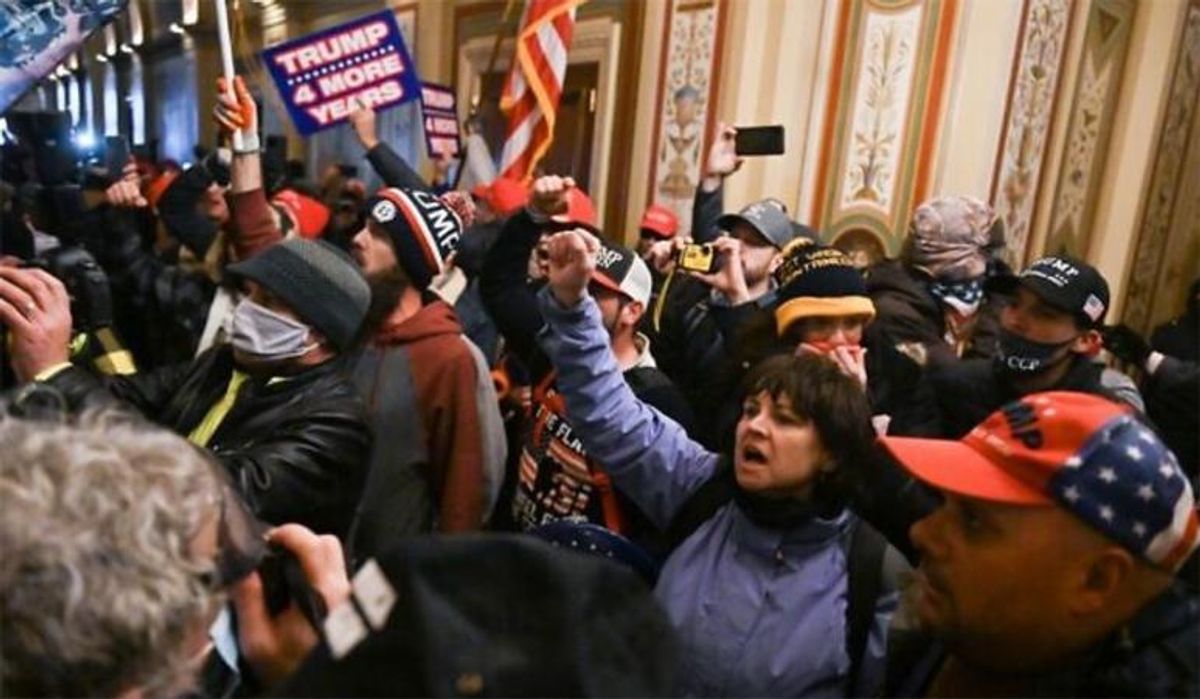 The FBI is currently attempting to track down hundreds of supporters of Donald Trump who stormed the U.S. Capitol on Jan 6th after receiving a flood of tips from "rioter's angry ex-wives and former girlfriends and employers turned tipsters," reports USA Today.

Although law enforcement officials have charged 300 of the insurrectionists for varying crimes committed following Donald Trump's "Stop the Steal" rally, the report states hundreds more can be expected after the FBI pulled investigators off drug trafficking and child sex crime cases.

According to the report, the FBI's tip line has been inundated with over 230,000 tips that require follow-up even after some of the more high-profile rioters have already been rounded up.

"They've mined tens of thousands of photos and videos. They followed trails the rioters left on social media bragging about being inside the Capitol, like the Florida man toting a rostrum or the New Hampshire man who snapped a selfie with a pilfered bottle of wine," the USA Today report states. "Arrests are expected to continue given the more than 230,000 digital tips the agency received, but the flood of arrests in the weeks after the riot has slowed, dropping from 175 in January to around 90 in February."

Aitan Goelman, who helped prosecute Oklahoma bomber Timothy McVeigh, is pleased with the work done so far, calling it a "massive undertaking" in light of the number of people involved.

"I'm pretty impressed with how quickly they've identified and apprehended a significant number of the insurrectionists that were in the building," he said in an interview.

As for those already arrested, the USA Today report paints a portrait of a nationwide manhunt that has resulted in arrests from a wide range of Americans.

"Arrests have been made in 41 states and the District of Columbia. The crowd convened at the Capitol that day from every corner of the country: Beverly Hills and the heartland, big cities and tiny communities. They're business owners and first responders, nurses and teachers, parents and grandparents," the reports states. " At least 30 are veterans. Most of them are voters. They range in age from 18 to 70, but average around 40. They're mostly men and almost all white. Many have bankruptcies or other financial troubles in their lives."

The report adds, "Among the roughly 275 people charged through March 3, they've racked up more than 900 charges. Additional charges are levied as new indictments are delivered by a federal grand jury in D.C., where most of the cases are being prosecuted by the U.S. Attorney General's office."

Reopeining the country from COVID-19 lockdowns mean an unfortunate return to mass shootings. Such was the case Monday when police reported a high school shooting in Knoxville, Tennessee.