Matt Gaetz sex competition was so shocking it had a Harry Potter rule: report 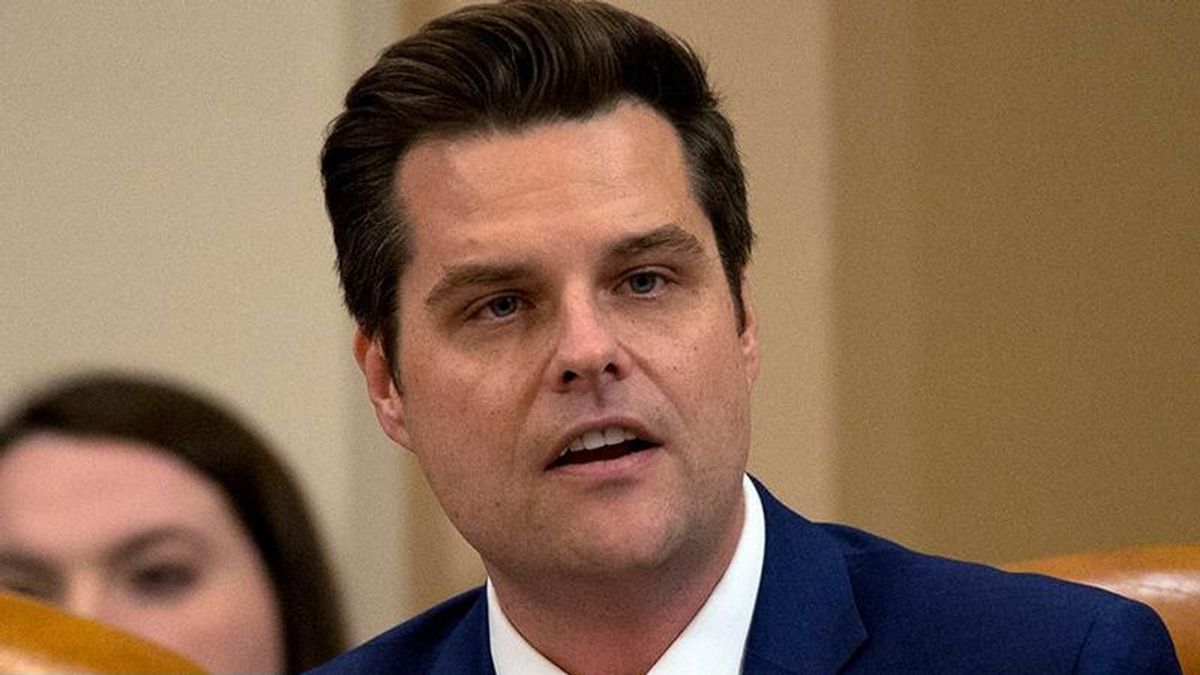 The new reporting is the latest on the Florida Republican's sex scandals, which reportedly involve him being investigated for sex trafficking, potential campaign finance violations, payments to sex workers using Cash App and Apple Pay, allegations of pimping, drugs, a fake ID scheme, and sharing nude photos of sexual conquests with fellow legislators on the floor of the House of Representatives.

"Sleeping with married legislators. Spending the night at a college sorority house. These were specific ways now-US Rep. Matt Gaetz and other Florida lawmakers could earn 'extra points' in a sex competition in which Gaetz is accused of participating when he served in the state's House of Representatives, a female GOP insider who worked with Gaetz in the 2010s told Insider in an interview," Business Insider reported Friday.

"The sex competition even involved the 'Harry Potter' book series, the GOP source told Insider. Anyone who had sex with a certain conservative woman "won the whole game regardless of points," she said. That woman was known as the 'snitch,' a nod to the Harry Potter game of Quidditch. The GOP source said she 'heard specific references of Gaetz being involved and scoring points.' She declined to name the woman to protect her privacy," Business Insider explained.

"The existence of the 'game' among male lawmakers was the 'worst kept secret in Tallahassee,' the GOP insider said. Lawmakers who participated publicly boasted about it, even among their female colleagues; some male legislators who didn't participate jokingly lamented the fact that they abstained. The hyper-sexualized and notoriously fratty culture in Florida's state capital is getting renewed scrutiny after the New York Times reported that Gaetz is the subject of a Justice Department investigation into whether he broke sex trafficking laws with a 17-year-old girl in 2019," Business Insider noted.

The game was initially revealed by Chris Latvala, a Republican who served alongside Gaetz in the Florida legislature. Latvala revealed the game over a year ago after Gaetz complained about him meeting with the Rev. Al Sharpton.

And you created a game where members of the FL House got "points" for sleeping with aides, interns, lobbyists, and… https://t.co/BQ0C1CZkF1
— Chris Latvala (@Chris Latvala)1578972729.0

"Oh my god, no way. Oh, my god," former 2016 campaign staffer Karli Andrews said upon being informed of the sex trafficking allegations.

"Knowing that, now I feel just — ew — I cannot even believe I talked this guy up and helped him become elected, for him to be such a skeeze," she said.

Anyone who had sex w/ a certain conservative woman "won the whole game regardless of points," she said. That woman… https://t.co/iAz9IJGPSy
— Darren Samuelsohn (@Darren Samuelsohn)1617389461.0

"Knowing that, now I feel just — ew — I cannot even believe I talked this guy up and helped him become elected, for… https://t.co/ZOqUS1mlSX
— Darren Samuelsohn (@Darren Samuelsohn)1617389672.0