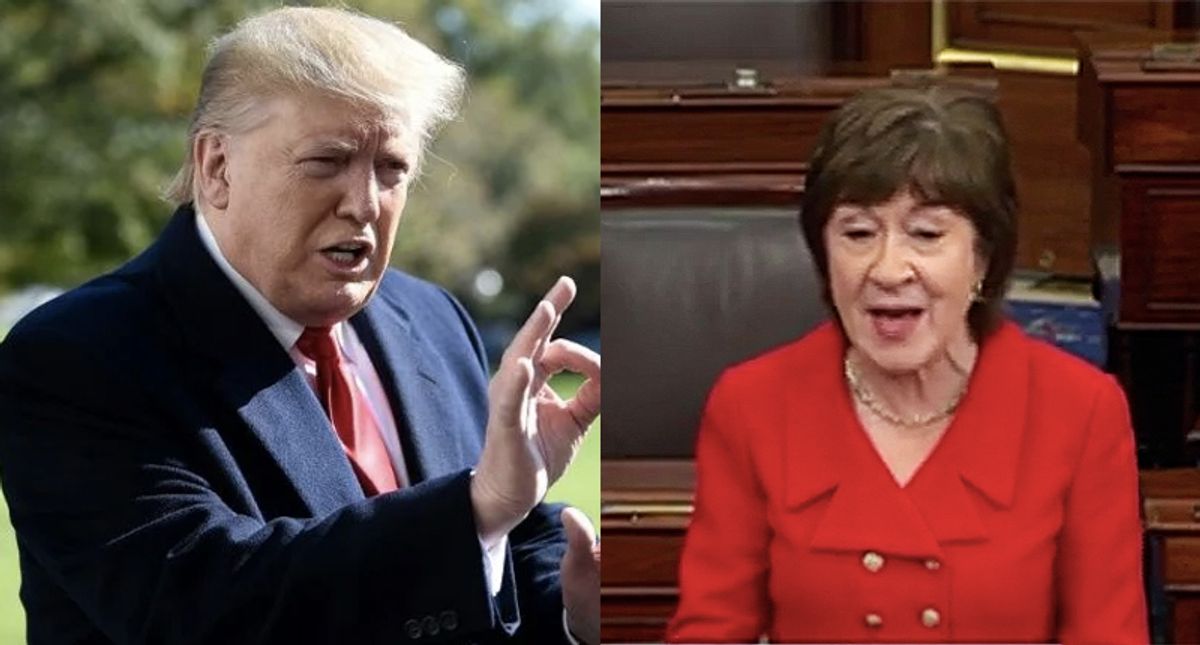 Just short of one year ago, Sen. Susan Collins (R-ME) said that she trusted President Donald Trump not to do anything illegal again.

"I believe that the president has learned from this case," Collins told CBS's Norah O'Donnell after voting to acquit Trump during his Senate impeachment trial. "The president has been impeached. That's a pretty big lesson."

In the time since then, Trump delivered a veiled threat to the Georgia Secretary of State, saying if he didn't "find" enough votes to change the Georgia presidential results he could be prosecuted for something. He also threatened a Secretary of State Investigator demanding "evidence" be found of voter fraud. Then he used his position to incite a riot and encourage his supporters to engage in an insurrection at the U.S. Capitol.

In a Bangor Daily News editorial, Sen. Collins told her state about the horrific day she experienced while the Capitol was under attack.

"Little did I know when I arrived in the Senate Chamber at 12:30 p.m. just how turbulent and dangerous the day would be, with the Capitol occupied, a police officer murdered and rioters breaking windows, looting offices and attempting to block the certification of an American election," she wrote.

She went on to say that she thought it was the Iranians, following through on their threat to strike the Capitol. It wasn't Iran. It wasn't the Taliban. It wasn't ISIS either. It was the supporters of Trump, who followed his demand that they march to the Capitol and fight against the election results.

She went on to explain that she questioned everything the Capitol Police were telling her. First, she said it didn't seem "wise" to stay put in the chamber. Then said that she was against the idea of members being put on busses and moved away from the area because it would make them "sitting ducks."

"Finally, we were ushered out of the chamber and taken through the tunnels under the Capitol, with the police urging us to "hurry, hurry!'" she continued, noting that she had chosen to wear high heels that day and had a hard time running but she didn't take her shoes off to rush to safety.

Meanwhile, Speaker Nancy Pelosi's staff was forced to barricade an office door and hide under a conference room table for over two hours, fearful that if the insurrectionists were able to break through the door they'd be killed.

It was only after officials were in a secure location and watching the violence on television that Collins thought to text the White House.

"I called and texted my closest contact at the White House to urge that the president immediately tell the rioters to stop their violence and go home," she wrote. "But President Donald Trump completely undercut that message by repeating his grievances and telling the rioters that he knew how they felt. This was terrible, especially since he incited them in the first place."

In a discussion Sunday, CNN's John Avlon was asked about Sen. Roy Blunt (R-MO), echoing Collins, that the president probably learned his lesson. According to Blunt Trump's words were "clearly reckless," but "my personal view is that the president touched the hot stove on Wednesday and is unlikely to touch it again. And if that's the case, every day we get closer to the last day of his presidency."

"For any Senator -- for anyone to say 'I think Donald Trump has learned his lesson,' is to be willfully blind and ignorant about everything we've learned about this president that culminated in inciting an insurrection and attack on the Capitol building in order to stop the peaceful transfer of power," Avlon said. "If you don't get it now, just give up. This is serious. A lot of people get how serious this is. This is history book serious. It is not over and it's not done and anybody who thinks Donald Trump has learned his lesson is clueless."

Collins left the attempted coup worried she couldn't "find a parking space." She closed her column about Sen. Lisa Murkowski's husband "building her a nice fire" and handing her a glass of wine.

Collins has stumbled quite a few times during the Trump reign. Once a pro-choice icon in the GOP, Collins revealed she had no idea that Judge Brett Kavanaugh was anti-choice when she voted to approve him. She also struggled to understand why her state was so angry with her during her 2020 campaign for reelection.

A second impeachment is going to be passed this week in the House and sent to the Senate. Collins didn't clarify if she intends to support the impeachment this time or if she still believes Trump "learned a pretty big lesson" from his first impeachment.

Read her full column in the Bangor Daily News editorial.

The more than 200,000 children killed by Nazi Germany at Auschwitz were honoured on Wednesday in online ceremonies marking the liberation of the camp which has come to symbolise the Holocaust.

Survivors sounded the alarm over the modern-day dangers posed by the resurgence of racism, anti-Semitism and Holocaust denial at a 76th anniversary event.

According to a report from CNN, former first lady Melania Trump is hard at work hiring and setting up an office at her current residence at Mar-a-Lago with the plan to keep her "Be Best" anti-bullying campaign alive even though she and her family are now out of the national spotlight.

As the report notes, the wife of the former president has already hired on three former White House aides to keep her initiative going, which CNN notes is a change from her White House time when only one person was employed to help her use her bully pulpit to defend bullied children.

"Trump's post-White House office will consist of three of her White House staff members, the sources confirmed to CNN. Hayley D'Antuono served for four years as the former first lady's director of operations and trip supervisor, and is now Trump's chief of staff," the report states before pointing out, "Trump often did little to help clarify or expand on her platform during her time in the White House, often going weeks between Be Best-focused public events. The East Wing policy office was not robustly staffed, at times sat vacant, and at most had one full-time, dedicated East Wing employee."

The report states that the wife of the ex-president is looking for office space in Palm Beach.

"Trump's office is for now functioning out of former President Donald Trump's private club, Mar-a-Lago, which also is where the former first family is living, and the staff members are at times working remotely," CNN reported.

The news outlet also noted that Melania Trump left the White House with her favorability rating at only 42 percent -- plummeting from a high of 57 percent recorded back in May, 2018, when she attended the funeral for the late President George H.W. Bush without her husband accompanying her.