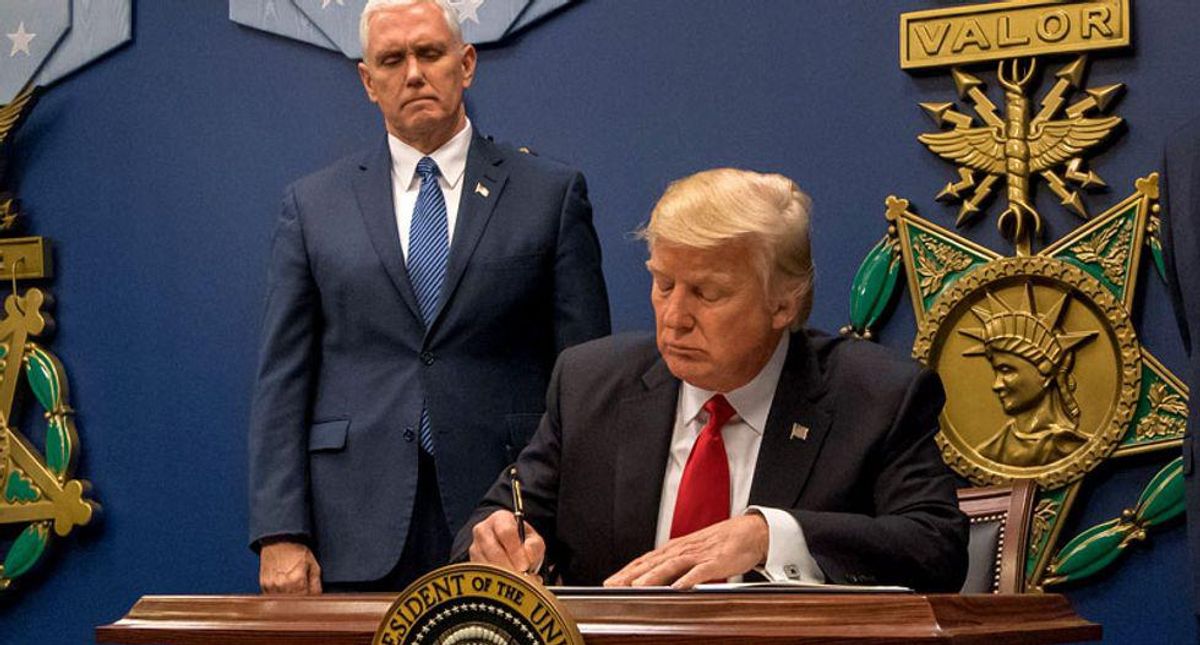 In an interview with the Washington Post's Greg Sargent, Rep. Jamie Raskin (D-MD) claimed that Donald Trump's attempts to get the Department of Justice to intercede on his behalf as he attempted to overturn the 2020 presidential election results was also part of an effort by the former president to manipulate former vice president Mike Pence.

Last week it was reported that Trump asked then-acting Attorney General Jeffrey Rosen to, "Just say that the election was corrupt" and "leave the rest to me," according to notes taken by acting deputy attorney general Richard Donoghue.

Since that time, it was revealed that Civil Rights Division head Jeffrey Clark met with Trump and then drafted a letter amplifying the former president's election fraud claims. But the letter was quickly shot down by his colleagues who threatened to quit if it was released.

On Saturday, Rosen sat down for seven hours behind closed doors with senators from both parties and reportedly documented multiple instances of attempts by Trump to influence the DOJ, with Sen Dick Durbin (D-IL) telling CNN's Dana Bash there "was an awful lot there" in Rosen's testimony.

According to Raskin, Trump was also trying to influence Pence in a roundabout way to keep him from overseeing the certification of the Electoral College votes -- which in turn led to the Capitol riot that is now being investigated by a House select committee.

Writing for the Post, Sargent explained, "Raskin pointed out key context: While exhorting the mob to descend on the Capitol, Trump repeatedly directed its rage at then-Vice President Mike Pence, while again urging Pence to use his phantom powers to invalidate the count of electors (which Pence had announced he couldn't do)... As Raskin notes, Trump spent months trying to concoct a pretext for invalidating the electoral count: The effort to get the Justice Department to 'announce' that the Georgia voting was dubious would fit the bill."

In an interview with the Washington Post columnist, Raskin explained, "He wanted DOJ to declare the election corrupt in order to help him coerce Mike Pence to reject specific results coming from the states," before adding it would give the former vice president "cover" to stop the certification.

Sargent added there will likely be more to come out over Trump's efforts; a suggestion that was echoed by conservative Amanda Carpenter on CNN on Monday morning.

He then noted, "... one of the attack's 'causes' is that Trump actually did want to subvert the count of electors to thwart a legitimately elected government from taking over. A full accounting of his effort to accomplish this via mob violence will of necessity include all the other episodes in which he established this intent beyond any reasonable doubt."