Legal experts: Trump's attempt to whitewash his call to 'terminate' the Constitution only makes it worse

Lawrence O'Donnell began his Monday night show highlighting Donald Trump's recent flub on his personal social media site in which he advocates terminating all rules and laws, even those in the Constitution just to make him president after losing in 2020.

Among the problems that O'Donnell saw in Trump's post, other than the obvious political and PR disaster that has followed, is that it would give a prosecutor in the Jan. 6 case the option to ask if Trump ever advocated terminating the Constitution. Since the post, Trump has tried to clean up the comments, but ultimately, the post is still live, and he ultimately doubled down on the idea using different words.

"One of the things that immediately struck me is that Donald Trump is not alone and isolated on his social media platform," said Goldman. "He remains the leader of the Republican Party and the vast majority of the Republicans in the House of Representatives still pay fealty to him. And so we are really left, Republicans especially are left, with a very simple question: Do you believe in democracy or do you believe in Donald Trump? There is no other way around it. Certainly, we have been saying this in many variations over the last several years, but he put it so starkly in that social media post."

He went on to note that the "smoking gun" never happens in an investigation. What Trump has done is made more admissions against his own interest than any defendant he's ever seen in his legal career. All of those statements are admissible in court.

"To me," Weissman began, "This is something that the government is going to argue pretty forcefully that it is going to come in as an admission. That is, when you are a defendant, your prior statements, if they are relevant and probative of something, they come into evidence as an admission, even if you never take the stand."

He explained that if Trump was to take the stand in his own defense, a question like that could be asked, but the statement alone is enough to flash it up on a screen for a jury to mull.

"This is somebody that is lawless," Weissmann continued. "What is going on is as the facts and law are creeping together and holding him to account, you see people like Donald Trump, Rudy Giuliani, Sydney Powell, all scurrying around trying to say that either the law is wrong or the facts do not matter, or they are not what they say there are. But you feel this noose tightening as you see each of them being held to account, and I would say finally being held to account. I think the statement, frankly, only got worse when Donald Trump tried to whitewash it. Both of those things come in, in other words exactly what you said Lawrence, would be played out in court, to say this is really damning evidence, and he knows it as he then tries to deny that he said it." 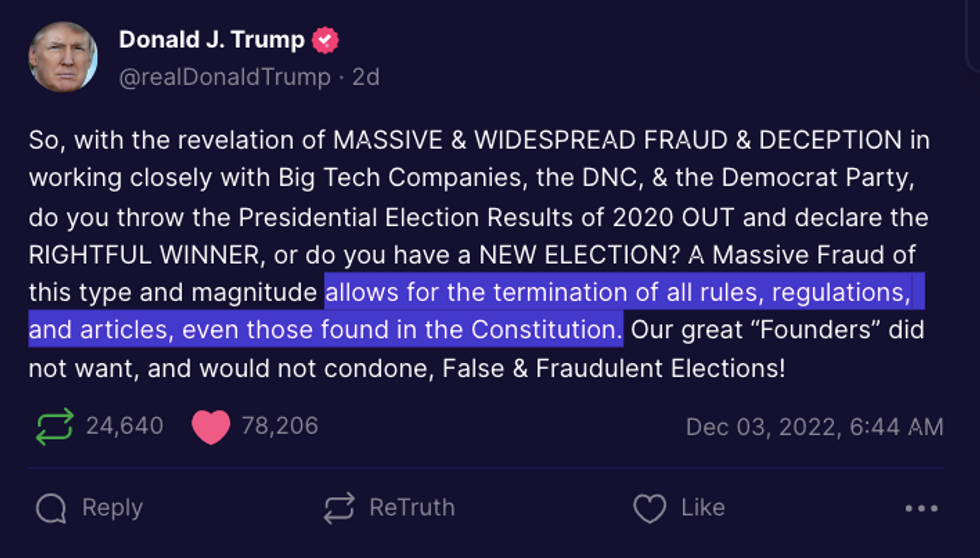