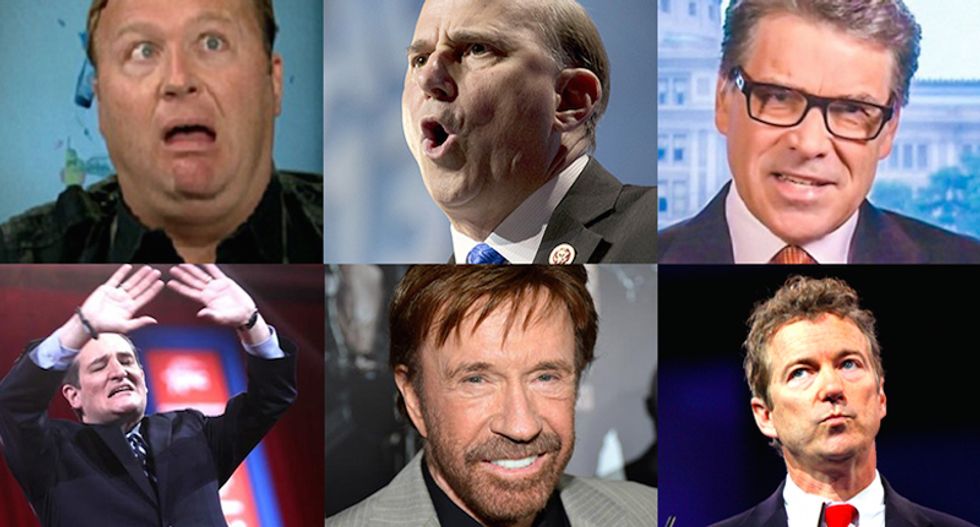 Well, President Barack Obama better get cracking if he intends to place Texas under U.S. control -- you know, unlike the past 170 years -- because the two-month-long exercise is scheduled to end Tuesday.

A lot of conservatives who really should have known better are guilty of "pandering to idiots" in an attempt to smear the president and undermine trust in his authority, and as the exercise ends without any guns seized or conservative Christian rounded up -- let's pause to remember those foolish conspiracy-mongers.

Sen. Rand Paul (R-KY), a Republican presidential candidate, entertained questions about the conspiracy theory during an April appearance on pro-slavery Iowa broadcaster Jan Mickelsen's radio program. “You know, I’ve gotten a few questions on it on the road, and I really don’t – I’m not sure about exactly what is going on with that,” Paul admitted, but he promised he would look into the wild claims.

Those wild claims were stirred up and promoted by a rogue's gallery of conspiracy clearinghouse websites -- including conspiracy kingpin Alex Jones, whose Infowars website warned of a "decades-old plan for martial law using Pentagon documents and establishment media reports to show that Jade Helm is part of the PsyOp to acclimate the American people to troops on the street and merge federal agencies with local law enforcement." Jones warned that his wild claims would be dismissed as the crazed rantings of a lunatic -- and that's exactly what happened.

Texas Gov. Greg Abbott ordered the Texas State Guard to monitor the training exercise after panicked residents grilled a U.S. Army spokesman about various conspiracy theories. Records show the Republican governor moved away from a more measured response knocking down those concerns after the wild public meeting, and the governor drew widespread criticism for "pandering to idiots."

Chuck Norris, the action star and conservative commentator, defended Abbott's order as he sounded the alarm about Jade Helm 15 -- which he speculated could be related to a possible ISIS attack. "It’s neither over-reactionary nor conspiratorial to call into question or ask for transparency about Jade Helm 15 or any other government activity," Norris said. The actor later claimed he was misquoted as his warnings were widely reported, but Norris repeated his concerns about ISIS in another World Net Daily column a few weeks later.

Rick Perry, the former Texas governor and Republican presidential candidate, agreed with Glenn Beck during a radio program that the fact that “normal Americans” feared the president would allow Islamic State militants to invade southwestern states during the military exercise proves that “crazy things are happening right now.” But Perry, who quit his White House bid last week, said no one would ever have to worry that "President Perry" would use the U.S. military to take control of Texas.

Sen. Ted Cruz (R-TX), also a GOP presidential candidate, questioned Pentagon officials about Jade Helm 15 and told voters he was satisfied the exercise would not result in a military takeover of U.S. states. However, he said Americans were justified in fearing the president. "I understand the reason for concern and uncertainty, because when the federal government has not demonstrated itself to be trustworthy in this administration, the natural consequence is that many citizens don’t trust what it is saying," Cruz said.

Not surprisingly, some of the most scenery-chewing comments about Jade Helm 15 came from the excitable Rep. Louie Gohmert (R-TX), who cited his own military service and right-wing conspiracy theories to justify concerns that Obama was targeting "hostile" conservatives. "Such labeling tends to make people who have grown leery of federal government overreach become suspicious of whether their big brother government anticipates certain states may start another civil war or be overtaken by foreign radical Islamist elements which have been reported to be just across our border," Gohmert said. He later accused Obama of essentially declaring war against states that vote Republican. “When my own commander-in-chief through his subordinates is just fine with, for games purposes, declaring an enemy of two or more of your states, I got a real problem with that," Gohmert said during an appearance on the "700 Club." "That is one of the most insensitive, outrageous things that a military commander could do.”

Of course, we can't say there were no shots fired during Jade Helm 15 because, after all, it is a military training exercise -- but also because paranoid gun nuts opened fire twice in one week at a Mississippi base where troops were taking part in the exercise. Three men in North Carolina, which did not take part in the exercise, were arrested last month after authorities said they began building an arsenal, including bombs, to fight back against a military takeover.

While there are many possible explanations for why many Americans fell for the conspiracy theory -- whether they were trying to spice up a "boring" life or, as one Texas mayor speculated, reacting to the gradual erosion of white supremacy -- there's simply no excuse for elected officials to indulge in such foolishness.

Of course, there is still one day remaining in the exercise -- so if the U.S. flag is raised over Texas or Kim Davis and other religious conservatives find themselves inside some Walmart store, maybe we'll be the ones with egg on our faces.