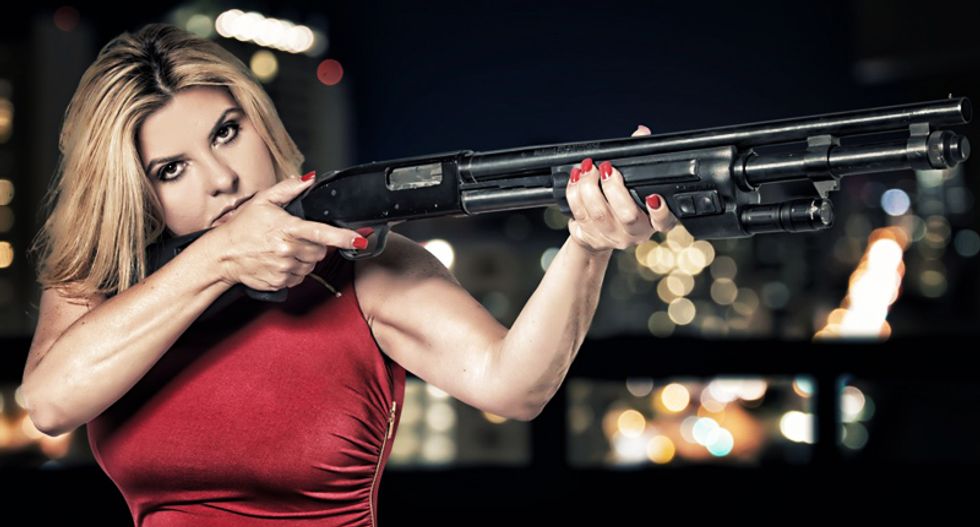 A Nevada assemblywoman, who previously gained national notoriety for claiming cancer is a fungus that can be treated with salt water, responded to Thursday's Oregon shooting by posting a picture of herself with a shotgun and blaming gun-free zones for the tragedy.

Writing on her blog, Assemblywoman Michele Fiore (R) bizarrely began by saying that the Oregon shooter -- now identified as Chris Harper Mercer -- may have been on "mind-altering pharmaceutical drugs" at the time of the shooting, She then turned her focus on gun-free zones.

"I have said it before and I will say it again: I believe that an armed society is a safe society," Fiore wrote.

"Labeling a public place a 'gun-free zone' will not create a non-violent environment for citizens; in fact, it does the opposite. By creating this illusion, we, as a country, are putting targets on the backs of our children, our families and our selves," she continued. "While the President has already used this tragedy to feed his anti-gun agenda by saying that these killings have become 'routine', what he fails to mention is the truly routine pattern of these terrible crimes is that they happen in gun-free zones. Places where people have been rendered defenseless by the government."

As noted by Oregon Live, Umpqua Community College is not a gun-free zone, with the school allowing anyone with a concealed firearms license to bring a weapon on campus.

In an interview with MSNBC, veteran and UCC student John Parker said he and other students were armed at the time of the shooting but didn't intervene they didn't want police SWAT teams to mistake them for the shooter.

Fiore, a prominent supporter of land-grabbing Cliven Bundy, is known  for outrageous statements that extend beyond Nevada's borders.

In July she vowed to install a Dukes of Hazzard horn on her truck to honor the Confederate flag as South Carolina lawmakers voted to remove it from the statehouse in the wake of the Charleston shooting.

In March she declared that racism is dead in the U.S. because we have a black president while congratulating an African-American colleague for being the first “colored” person to graduate from his college.