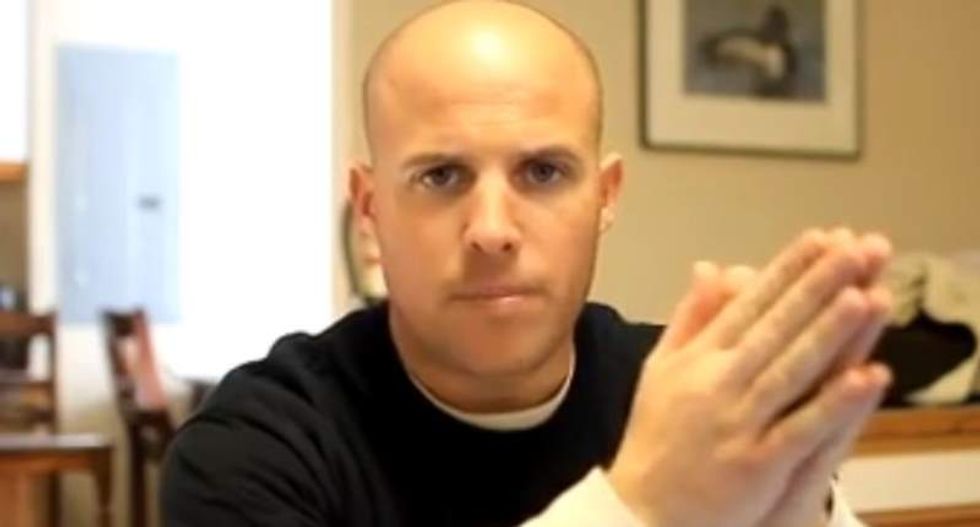 An anti-Islam activist and member of the militant group seizing an Oregon wildlife refuge said in a video released on Friday that the movement was bigger than their own individual pasts -- after insulting another member of the group.

Jon Ritzheimer opened the video by criticizing "anti-violence patriot" Lewis Arthur in the wake of a confrontation between Arthur and "Blaine Cooper" -- the name used by multiple-time felon Stanley Blaine Hicks. The 14-minute statement was posted on Cooper's Facebook page.

"I'm questioning whether or not this Lewis Arthur is perhaps a homeless person and has found a way to develop this guise using the name 'veteran' for Veterans on Patrol to get people to sympathize with him and donate to them so that he can have shelters and food and everything brought to him," Ritzheimer said. "So, again, people, if you just think you know Lewis Arthur from social media, you do not know Lewis Arthur."

Arthur, who has identified himself as the leader of the Veterans on Patrol group, was accused of seeking "a couple seconds of fame" after saying that he was attacked by Cooper while attempting to remove women and children from the Malheur National Wildlife Refuge, as well as Ryan Bundy, who took part in the federal standoff with Cliven Bundy in 2014 and boasted about setting up sniper teams during that encounter.

At one point in the video, someone can be heard whispering the line, "We need to stop fighting with each other," which Ritzheimer repeats. Later, he asked viewers not to focus on the background of any individual in the group.

"Maybe there is a felon here," he said. "Let he who's out there without sin cast the first stone. Yes, Blaine Cooper may have an ugly past, but that man stood by my side when we thought there was certain death headed our way."

Ritzheimer did not mention that "Cooper's" past includes felony charges for assault with and without a deadly weapon, as well as alcohol- and traffic-related offenses. The Oath Keepers militia group has described Cooper's position within the group as "the first sign that nothing good was going to come" from their action backing up Ammon and Ryan Bundy's taking of the facility.

For his part, Ritzheimer first attracted national attention last year after boasting about making t-shirts saying "F*ck Islam" and organizing armed protests against mosques in Arizona. He subsequently gained the attention of the FBI after threatening to attack a small, majority-Muslim community in New York state.

On Friday he described the taking of the refuge as a sacrifice he and his cohorts were willing to undertake for the good of the country.

"A lot of people here are losing work -- they're not able to go home and provide for their families. I am one of them," he argued. "But I'm making that pledge to these men to know that as long as the greater good for America comes from all of this, what's mine is yours."

However, Ritzheimer did not mention that he actually relies on his veterans' disability pay as well as "a wife that works."

Watch Ritzheimer's statement, as posted online on Friday, below.