Donald Trump still refuses to denounce the racist 'birther' movement: 'I don't talk about it' 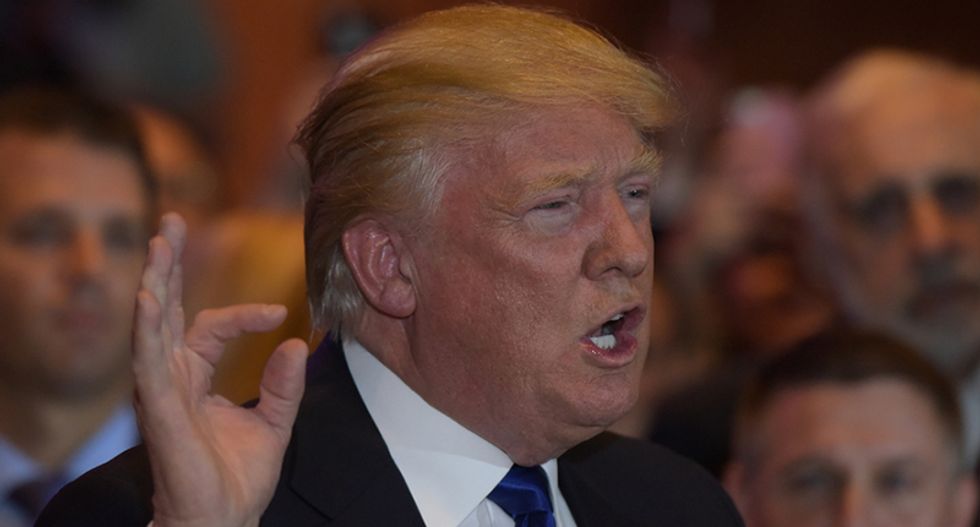 Republican presidential candidate Donald Trump has been courting African-American pastors as he attempts to increase his support among black voters. But after years claiming the first black president was born in Kenya, can he convince voters the accusations weren't racist?

According to NBC News reporter Ali Vitali, Trump's solution to his controversial past as a "birther" is to pretend it doesn't exist. "I don't talk about it," Vitali quoted Trump saying in a tweet.

The so-called "birther" movement was first begun by anti-Obama voters in 2008, but Daily Beast editor-in-chief John Avlon explored a more in-depth history in his book Wingnuts: How the Lunatic Fringe Is Hijacking America. He found a Clinton supporter from Texas who managed to get Pennsylvania attorney Philip Berg to sue then Sen. Obama in federal court. The court threw out the case, saying he didn't have any standing and the Supreme Court laughed at it. Avalon found no record anywhere of Clinton herself claiming that Obama wasn't a natural born citizen of the United States, but what he did find was a long history of Donald Trump doing so.

“The appeal of the birther issue was, ‘I’m going to take this guy on, and I’m going to beat him,’” said Sam Nunberg, who worked as a Trump advisers during the birther campaign but was fired from the presidential efforts. “It was a great niche and wedge issue.”

Trump first began the crusade in March 2011 when he did an appearance on "The View" asking, “Why doesn’t he show his birth certificate?” While on Fox News's "On the Record," Trump demanded, “I want to see his birth certificate.” In an interview with NBC’s “Today Show,” he revealed, “I’m starting to think that he was not born here.”

A 2011 study of birthers in the Journal of Experimental Social Psychology showed racial prejudice played a substantial role in those who believed the claims that Obama wasn't an American.

"The influence of racial prejudice in contemporary U.S. society is typically manifested in subtle, indirect forms of bias," the study outlined. "Due to prevailing norms of equality, most Whites attempt to avoid appearing biased in their evaluations of Blacks, in part because of a genuine desire to live up to their egalitarian standards, but also because of concern regarding social censure. As a consequence, Whites' prejudice is more likely to be expressed in discriminatory responses when these actions can be justified by other factors."

Yet, as Trump has begun to campaign in the African-American community for the first time in the 2016 election, his surrogates are being tasked with explaining Trump's history of support from xenophobic and racist supporters and racist groups coupled with a track record of promoting birtherism.

Former New York Mayor Rudy Giuliani's solution was to demand that Democrats apologize to Trump for calling him a racist over the birther claims. His statement came just a week after former Trump campaign manager Corey Lewandowski tried to revive Trump's birther claims. Just this weekend, Trump surrogate Paris Dennard told CNN that black voters do continue to have legitimate questions about President Obama's birth certificate, though there is no proof of it.

However, when asked to defend his claims, apologize for them, recant them or anything else, Trump seems to have been told to say nothing. It's unclear if that is a strategic decision made by the campaign since only 9 percent of American voters say there is "solid evidence to prove" that Obama wasn't born in the United States, according to a 2015 CNN poll. Only 1 in 5 American voters still believe that Obama was born outside the United States. In that poll, 4 percent of non-white respondents said Africa, 3 percent said Kenya and 5 percent said "another country." The margin of error on those numbers, however, is plus or minus 7 percent. So, it's clear, if Trump wants to win the presidency and make gains among black voters, being a birther will hurt him.

Trump has refused to release his own birth certificate and passport information and was polling at just 1 or 2 percent with African-Americans depending on the poll. NBC News reported last week that his attempts to woo black voters has actually had the opposite effect he hoped.