David Hogg calls BS on Rick Santorum: If you're 'shot in the head no amount of CPR will save you -- you're dead' 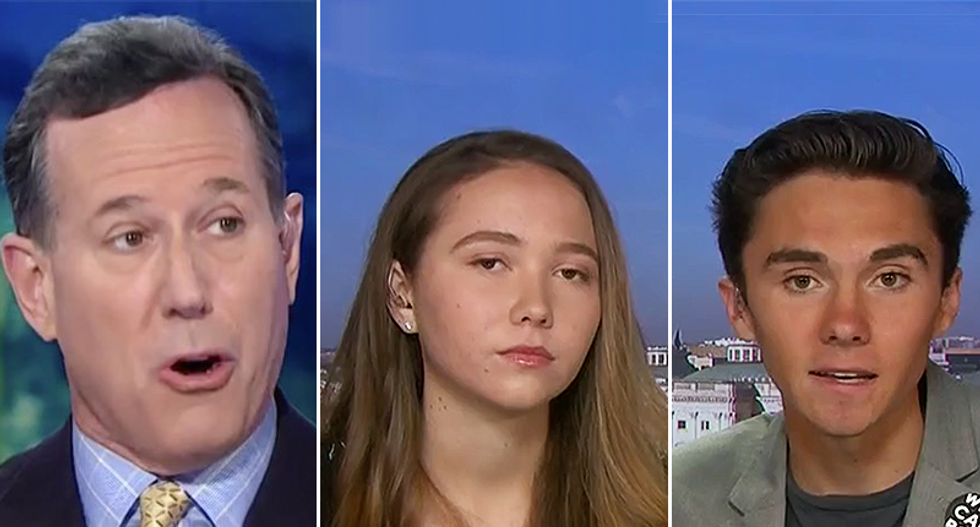 "How about kids instead of looking to someone else to solve their problem, do something about maybe taking CPR classes or trying to deal with situations that where there is a responsibility," Santorum lectured the teens.

"I just think it's completely absurd that he's even thinking about teaching us CPR when with we're having gun violence all across America and even in our schools," Miss Hogg said. "The fact that he's saying CPR when my friends are dying on my floor and nothing is being done about it -- he's just using it as a distraction away from guns.

Her brother agreed and said that there are several programs that help communities that are heavily impacted by gun violence.

"I saw it last night on the news," Mr. Hogg said. "Students are able to respond and administer whatever first aid they can assuming the person's still alive. At the end of the day, if you take a bullet from an AR-15 to the head to no amount of CPR is going to save you because you're dead."

They also responded to the NRA's attacks on them and accused them of ignoring their own membership, which seeks sensible gun regulations.

"I think if the NRA was on board to actually implement safety and actually give people grants to these schools and not make it a few grants," suggested Mr. Hogg. "There are programs to actually ensure just school safety alone have not been enough."

He explained that from his perspective he doesn't see the NRA investing in gun safetyf.

"Many members of the NRA are safe responsible people," he continued. "I've said it before I'll say it again, most members of the NRA are safe responsible gun owners that just want to protect their Second Amendment rights to own a weapon. When the people at the top are paid by the gun industry to ensure that they scare American citizens and that they're able to sell more guns and scare more people as a result, they don't get people enough training to own these guns."

He also noted no one in the movement is attempting to take guns away from Americans.

"We understand that you have a right to the Second Amendment and to own a firearm," he said. "We just don't think if you have a criminal history, a history of mental illness or history of domestic violence that you should be able to get a weapon. I think that's something we can all get behind. I think a lot of the time people just misconstrue us and manipulate us into seeming like we're trying to take your guns. Thats what the NRA has been doing too. They're trying to scare people into buying more guns so that they can make more money, so that they can scare more people. I think that's just plain wrong."

Watch the full interview below, including a hit at Sen. Marco Rubio (R-FL) and his alleged inaction in wake of the Parkland, Florida shooting: