Seth Meyers nails how to tell if Donald Trump and Rudy Giuliani are lying: 'Just point a camera at them!' 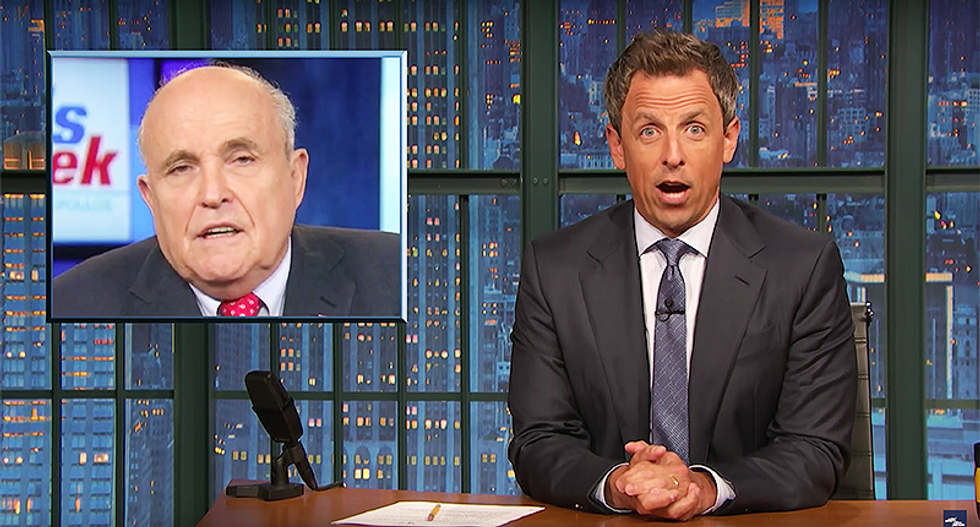 Monday began with President Donald Trump's lawyer Rudy Giuliani's gaffe-filled interview with CNN that was supposed to be a clean-up of another interview flub. It's just the latest in a long line of mistakes made by the president's attorney in their public relations campaign against the special counsel and FBI investigators.

During Seth Meyers "Late Night," the host noted that the president and his team lie so badly that all anyone would have to do is point a camera at them.

"He's a liar, whose lawyer is lying about his lying lawyer's lies," Meyers summed up Giuliani's attacks on ex-Trump lawyer Michael Cohen. He noted that there should be a Dr. Seuss-style book about it called The Lie-ax.

Meyers went on to mock Trump for the way that he worked to defend his son Donald Trump Jr. to press last week.

"He's 40 and you're talking about him like he's a Golden Retriever," Meyers joked.

In his Trump voice, Meyers took the president's praise even further.

"He's a good boy. Very loyal," Meyers said. "And house trained. You never hear the fake-news talk about how he's house trained. But it's been weeks since he's had an accident."

He noted that it does make sense if you think about Trump in this context.

"Trump is a 72-year-old man, who eats McDonald's, wants a Space Force and gives people dumb nicknames," Meyers continued. "By the end of his presidency, his motorcade will just be Secret Service pulling him in a Radio-Flyer."

The NBC host explained that the story keeps shifting for the Trump team. They've gone from saying that the Trump Tower meeting wasn't about getting dirt to saying nothing came of it. Then they tried to claim that even if something did come of the meeting, "that's politics." Today, however, Meyers noted, Giuliani moved the goal-post even further.

Trump has maintained that there is "no collusion."