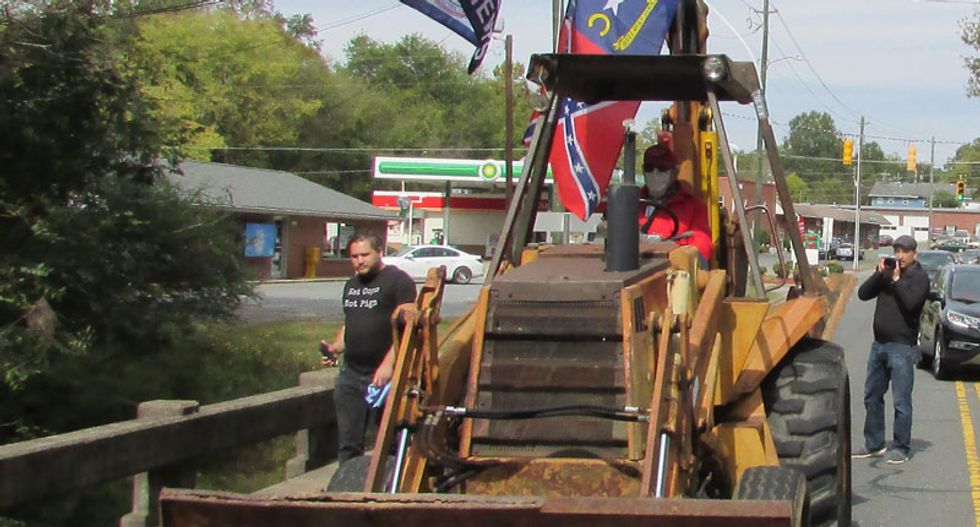 Neo-Confederate activists and antiracists clashed briefly in Pittsboro, NC, a town west of Raleigh, on Saturday, when a man wearing a “Trump 2020” hat and a face mask attempted to drive a front-end loader festooned with Confederate flags down a street where the two groups were facing off.

After antiracists blocked the driver, a local man identified as Sam White, neo-Confederate activists spilled into the street demanding that he be allowed to pass. Neo-Confederates, at least one of whom was armed with a holstered pistol, and antiracists engaged in shoving and grabbing before police separated the two groups and cleared the roadway.

For weeks, Pittsboro has been the scene of increasingly tense confrontations between neo-Confederates, many of them armed, and antiracists, after the Chatham County Board of Commissioners voted 4-1 to give the United Daughters of the Confederacy an Oct. 31 deadline to remove the Confederate monument in front of the Chatham County Historic Courthouse — at the center of a roundabout in the middle of town. A conglomeration of neo-Confederate groups led by the Virginia Flaggers responded about a month ago by erecting a Confederate flag across the street from Horton Middle School, a historically black school named for Moses Horton, a former slave and published poet. The move has been received by many townspeople, black and white, as a deliberate act of racial intimidation.

A scuffle broke out in Pittsboro after antiracists blocked a masked man on a front-end loader with Confederate flags https://t.co/SdBgPgm7dY
— Jordan Green (@Jordan Green) 1571504857.0

The escalating conflict over the monument has attracted the attention of overtly white supremacist groups who see an opportunity to radicalize neo-Confederate groups that claim that they are not racist and are merely motivated by a desire to protect “heritage.” Members of the League of the South, a group that advocates the creation of a white ethno-state in the former states of the Confederacy and took part in the violent Unite the Right rally in Charlottesville, Va. two years ago, have shown up in Pittsboro on three previous occasions.

Saturday’s rally also caught the attention of Billy Roper, a neo-Nazi organizer in Arkansas, who warned his followers that antiracists would attempt to tear down the Confederate monument. Roper promised in a post in advance of the rally that he would have a report this weekend on his podcast about “the accelerating situation in Pittsboro.” Accelerationism is a concept embraced by an array of white power groups, including Atomwaffen, that violence and chaos is desirable because it will hasten the collapse of society and bring on a race war.

Pittsboro lies on a political and cultural fault line in North Carolina, with a split between the more progressive residents in the urbanizing northeast corner closer to the Triangle — the urban area comprised of Raleigh, Durham and Chapel Hill — and more rural, conservative areas to the west. Chatham County was narrowly carried by Hillary Clinton in 2016, while in some rural precincts Trump earned as much as 88.8 percent of the vote. After protesters tore down Confederate monuments in Durham and Chapel Hill, and the city of Winston-Salem removed its monument, neo-Confederates view the impending removal of the monument in Pittsboro as a dangerous tipping point.

“The conflict was unavoidable, given what’s happening across the nation, and what’s happening in the Triangle,” said Randy Voller, the former mayor of Pittsboro and former North Carolina Democratic Party chairman. “We’re the next logical place. The added fuel to the fire is the notion of putting up a Confederate battle flag across from a historically black school. They know that the Confederate flag is negative iconography, and they’re trying to use it as leverage to get the county commission to back down from removing the monument.”

The “Pittsboro Confederate Monument Rally” was advertised as taking place in front of the historic courthouse at noon. Antiracists from Chatham County and across the Triangle region responded with a “unity march” to a parking lot across from the courthouse beginning at 10 a.m. The unity march, which drew about 200 antiracists, represented a compromise between local residents rooted in nonviolent traditions and more seasoned activists from the Triangle who uphold a principle of de-platforming to make neo-Confederates feel uncomfortable.

Kirsten Coleman, one of the speakers at the rally, recalled attending Northwood High School in Pittsboro and seeing the Confederate soldier atop a pedestal in front of the historic courthouse.

“Every single day that was what I had to face, and see that this town was not welcoming to me or my people,” Coleman said. “This is a clear indication that we have never been welcome here. And yet it is a place where we have built our families. We have worked tirelessly, and yet we have never been welcomed. I want a place, a nation — not just in Pittsboro, but all across the United States where we can live up to the principles that some of the founding fathers put into the Constitution about all men being equal.

League members have conspicuously displayed their flag at previous rallies in Pittsboro, and on Oct. 5, a black “Q” flag was displayed at a gas station in another part of town.

The “Q” flag, which is embraced by League members and more extreme members of the neo-Confederate movement, honors William Quantrill, a Confederate guerilla leader who led an 1863 raid on Lawrence, Kans., resulting in the massacre of civilians and burning most of the town.

Graves said that Michael Hill, the president of the League of the South, has "said about Charlottesville that it should suffer the same fate as Lawrence, Kansas. That encapsulates the view that any municipality that goes against Confederate values should suffer violence, full stop."

“With Pittsboro, it seems like there are protesters that have centered on this iconography,” Graves added. “We’re seeing them incorporate this more into their identity.”

In addition to an array of neo-Confederate groups, including CSA II, ACTBAC NC and Heirs to the Confederacy, Saturday’s flag rally attracted several members of the Hiwaymen, a far-right group with an anti-Muslim and anti-LGBTQ stance that participated in the Unite the Right rally and a Patriot Prayer gathering in Portland, Ore., along with at least one member of the Proud Boys.

Responding to a statement by the rally organizers that League of the South members would not be welcome n Pittsboro on Saturday, Hiwaymen leader Billy Helton angrily declared on Facebook Live: “We will stand with LOS. We will stand with Billy Roper.”

While insisting that he and the Hiwaymen are not white supremacists or “Jew-haters,” Helton told his audience they agree with the League and Roper on a couple points. “And that’s keeping our society together and putting Christianity out front, and protect our history and heritage,” Helton said. “Sorry, if you ain’t into that, you can go to hell.”

“They have hidden motives,” she said. “There are things that are very dark here.”

She recalled that on Sept. 28, a North Carolina neo-Confederate activist named Tom Parnell pointed at a black antiracist protester and said, “I got a rope for you.”

“If you’re standing out here for this monument, what correlation does a rope have?” she asked.

Artis Johnson, who was also standing across the road from the neo-Confederate flaggers on Saturday, confirmed that he was the recipient of the racist threat.

Tempers flared as the afternoon wore on. Twice after the front-end loader festooned with Confederate flags was turned back by counter-protesters, antiracists crossed the road to the side where the neo-Confederate flaggers were gathered. In one instance, they obtained Bible, and Molly Conger, an antiracist from Charlottesville taunted them by tearing the pages out and lighting it on fire, while admonishing, “Sweetie, I looked and I didn’t see anything about the defense of the Confederacy. Are you sure you got the right version?”

Later, after the two groups dared each other to fight, antiracists crossed the street to oblige, and Proud Boy Jay Thaxton shoved an antiracist before police broke up the altercation.

The taunts continued from one side of the road to the other. Among those still itching for a fight was Johnson.

“Meet me in the fucking grass, bitch,” he yelled across the road. “I’m from a fucking slave family.”

Joran Green is the senior editor at Triad City Beat, an altweekly in the Piedmont Triad region of North Carolina.

[Correction: A previous version of this story noted that the "Q" flag displayed on October 5 was placed across from the middle school.]