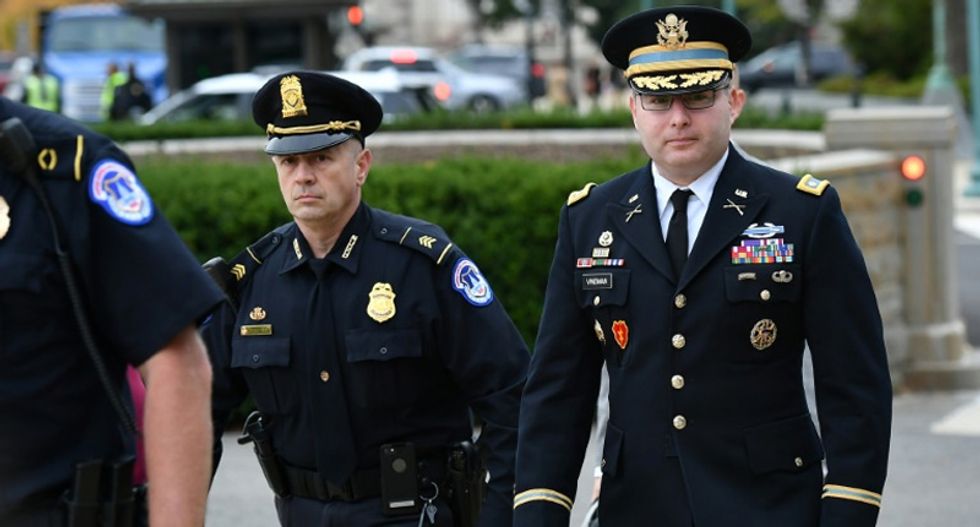 Lt. Col. Alexander Vindman appeared before Congress Tuesday to answer questions about President Donald Trump's phone call with the Ukraine president in which he demanded an investigation into former Vice President Joe Biden in exchange for military aid. Republicans were not happy with him and went on the attack. It prompted MSNBC panelists to call out the GOP and praise the patriotism of Vindman.

MSNBC host Nicolle Wallace called it an incredible moment when Vindman stated his father told him not to worry. He explained that unlike his father's experience, speaking truth to power doesn't put you in danger in the United States. His Ukrainian father understood things differently during his military service.

"It's a reminder of why these hearings matter," said MSNBC host Ari Melber. "To see these people with our own eyes. That was really the moment where you saw the sloganeering of 'Make America Great Again' lined up against the people who actually live the other dream. And they serve, and they come from other countries and as long as they are loyal and serve America, that is the American dream, and it always has been in its best days."

Wallace noted that it was a sharp distinction between Vindman's mind and his perception of right and wrong, which propelled him up the chain of command to ask questions.

"At a point in time in our country when we've looked at so much that comes out of this White House and felt it was quintessentially un-American, today Alexander Vindman gave the country an opportunity to reclaim patriotism," former federal prosecutor Joyce Vance said. "You watch his testimony. He's who you want your children to grow up to be. He's brave. He's righteous, and I think to your point, a lot of folks in government see conduct that makes them uncomfortable. Alexander Vindman didn't just go back and sit behind his desk. He took it to the person in his chain of command who he was supposed to go to, and we saw quibbling from the Republicans on that point that he didn't go to Morrison, his director. He went to the lawyers. That's where you're supposed to go when this happens, and he did it perhaps because he saw illegality."

Vance explained Vindman isn't a lawyer, but he knew Ukraine's stability was critical to the U.S. national security, and he wanted to ensure America was protected against that.

"We should be standing up and cheering like the folks in the room did," Vance explained.

Wallace noted that Vindman wasn't questioning the president's authority, rather he was questioning the conduct he was concerned was outside stated U.S. policy toward a fragile democracy fighting Russia.

Former CIA analyst Ned Price addressed the Republican attempts to question Vindman's patriotism because he spoke Ukrainian to counter-points there.

"You know, I think one of the Democratic members had it right," Price began. "Just because it was cloaked in parliamentary language and a Brooks Brothers suit doesn't make it any less shameful. That's precisely what it was. When I heard that anecdote for the first time, which was today, I just assumed it was basically a joke on the part of the Ukrainian official."

Price said that Vindman was likely talking to someone with familial ties to his own country and someone who was proud that he'd gone on to do great things for the American government.

"And [it] was probably just putting forth in a manner of jest," Price said. "The fact that It was brought up in this way and in the context of, 'Well, were you speaking Ukrainian?' How many times did they ask you? Did you report this? It was nothing but a smear and wasn't a very good one at that."