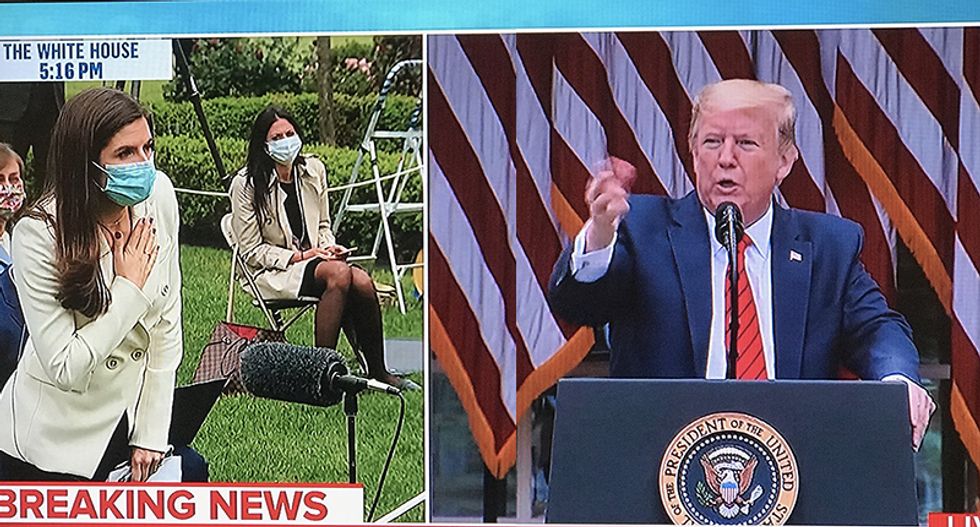 A Politico Magazine column by Jack Shafer speculated that the reason Trump is bailing on the press briefings is that the fights he typically had with the press involved people of color and women and it could hurt him in November. Until recently, Trump was willing to face off against CNN reporter Kaitlan Collins, Urban Radio's April Ryan, CBS News reporter Weijia Jiang and, on Saturday, CBS News reporter Paula Reid. Now, however, the president has to clean up his act if he wants to win back female voters in November.

Nancy Cook and Gabby Orr reported that Trump's top aides have counseled him to avoid long briefings where he could get himself in trouble “straying off message and generating negative headlines.”

"Another way to view his dust-ups with female reporters is as an act of conflict avoidance," said Shafer. "With his support among suburban women dropping in the polls, the Trump camp thinks that dodging unnecessary clashes with women in the briefing room might help win additional votes in November. Essentially, don’t make a bad situation worse."

Typically, Trump would go on the attack, but now "his usually reliable mouth almighty seems incapable of articulating a put-down or a blow-off response," the column said. "Our two-fisted brawler of a president, always ready to smash the interlocutors from the press with a virtual folding chair, has replaced moxie with pouts."

Now, he's turned into the weak leader Republicans at the Lincoln Project have alleged he is.

"He makes a show of maintaining his dominance by beating his breast, but when challenged by somebody superior, he takes his beating then slinks off to a dark, safe place to lick his wounds," said the Politico column.

Stories of Trump's loss of suburban white women began popping up last November, but now, amid the coronavirus failures, a recession, and record unemployment this spring, Trump is in serious trouble with the demographic.

Trump’s support among women, college-educated, suburban and non-college-educated, has plummetted since his 2016 win. The worst decline, however, is coming from white, college-educated women, who abandoned him. When he tried to send a tweet about it, he cited a report about suburban women, but he changed it to be about "housewives."

The Suburban Housewives of America must read this article. Biden will destroy your neighborhood and your American D… https://t.co/ufn2RFsvJU
— Donald J. Trump (@Donald J. Trump)1595530000.0

All of it puts Trump in an awkward position. If he avoids conflict with the women, he looks weak. But if he fights with them, he continues to lose votes.