A 'rise in white supremacy': Black pastor alarmed by Proud Boys night of violence and vandalism in DC 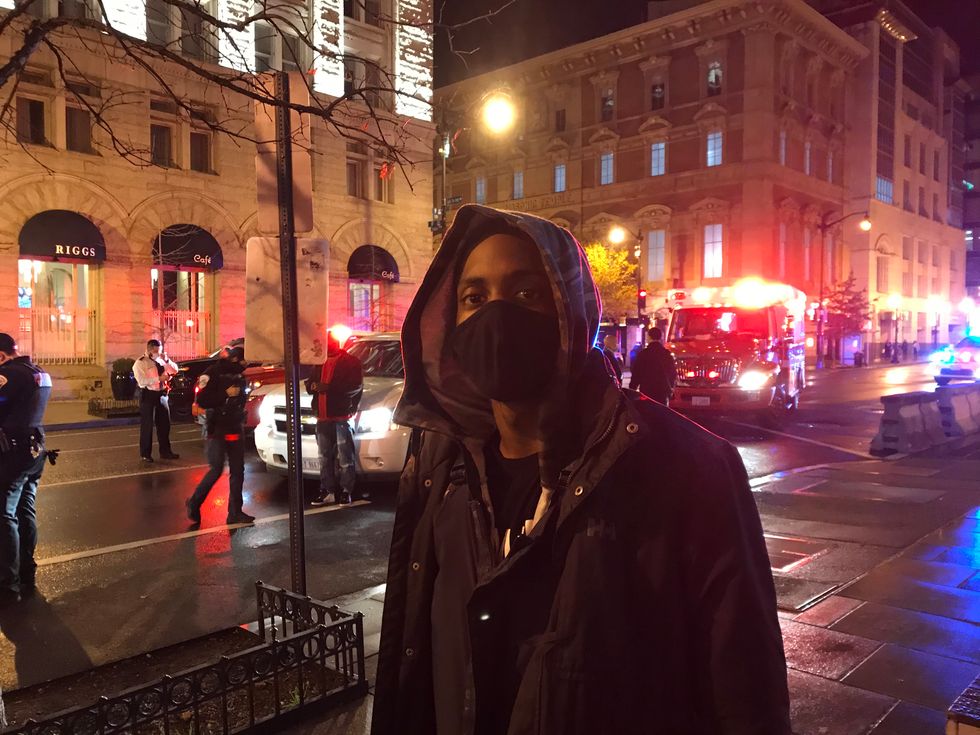 Piggy-backing off the festival of MAGA fervor, COVID denialism and Trump-election fantasy in Washington DC on Saturday, hundreds of Proud Boys and other right-wing thugs roamed through the nation’s capital as afternoon turned to night, spoiling for fights with antifascist adversaries and local residents alike, and vandalizing property.

Staging from Harry’s Bar, a favored gathering place, Proud Boys equipped paramilitary-style with helmets, plate-carriers, kneepads and gloves, moved through a 40-block area of downtown DC. They marched by the hundreds to confront antifascists at Black Lives Matter Plaza and clashed with police, who formed two lines to separate the opposing groups.

They stole a Black Lives Matter banner from a historically African-American church and burned it in the street. Clashes between the Proud Boys and adversaries resulted in at least half-dozen stabbings, along with fistfights, volleys of bottles and mace. Growing increasingly angry over the course of the night, Proud Boys roved in smaller bands, looking for fights and assaulting Black residents.

Confronting officers in the police line, Proud Boys demanded to be let through to fight antifascists.

“Let’s clean it up…. Let us handle these motherfuckers,” said Jeremy Bertino, a Proud Boy from North Carolina, as captured in a video published by videographer Ford Fischer.

During another flashpoint between Proud Boys and police, a man wearing a red MAGA hat and carrying an American flag angrily yelled as US Park Police held a line in riot gear: “I want blood. We’ll clean up antifa for you.”

Another right-winger admonished the police: “Have the courage to put your badge down and go home.”

Later, Bertino was one of four people stabbed near Harry’s Bar, a favored gathering place for the Proud Boys. The other victims were identified as Franklin Todd Gregory of McMinnville, Tenn.; Corey Owen Nielsen of Robbinsdale, Minn.; and Gregory Lyons, no address. The police arrested Phillip Johnson, a DC resident, and charged him with assault with a dangerous weapon. The police said Johnson pulled a knife after another person pushed him in the back. Then, according to police, yet another person started pulling at Johnson’s mask, and then one of the men started repeatedly punching him in the head. Bertino, Gregory, Nielsen, Lyons and Johnson were all taken to the hospital, according to police, but only Johnson was arrested.

In a separate clash that took place on K Street north of the police cordon around Black Lives Matter Plaza, at least one Proud Boy and one antifascist were stabbed, according to SM Love, a journalist with Black House News who filmed the incident.

Black-clad antifascists also came with protective gear, including helmets, goggles and homemade shields, but most of them remained penned inside Black Lives Matter Plaza.

Antifascists assembled at Black Lives Matter Plaza at noon on Saturday to protect the space from Proud Boys and other right-wingers, who had in the past vandalized artwork and torn down signs placed on the fence surrounding Lafayette Square. While the antifascists were penned into the space by double police lines, the city shut down traffic for dozens of blocks, giving the Proud Boys free rein to harass and antagonize perceived foes, largely with impunity.

After the stabbing near Harry’s, a dozen Proud Boys assaulted four Black local residents outside the Downtown Holiday Market. Stephon Shields said he was riding by on his scooter when the Proud Boys walked up on him. Shields said one of the Proud Boys said, “Hey fellas, we got one!”

The Proud Boys approached him with mace and nightsticks, Shields said. A Washington DC Metro police officer across the street yelled in their direction, and Shields said the officer appeared to treat him as the aggressor. He said he picked up a chair to defend himself as Proud Boys sprayed mace at him.

Jon Miles, the chief security officer at the holiday market, said he went to try to assist the officers, and a Proud Boy came up from behind him and maced him in the face. An officer grabbed Shields and shoved his face into a storefront window, he said, and Proud Boys yanked at his feet. After the officers got him on the ground, one sat on him. Another Black man who attempted to assist Shields said he was pepper-sprayed and knocked to the ground by Proud Boys. The man, who declined to give his name to Raw Story, showed bruises on his wrist where he was injured from the weight of his body as he was pushed down on the pavement.

“I’m sitting here with probably a broken wrist,” he said. “If I had stood up and taken a swing back at them, I would be locked up right now.”

A fourth Black man, who was not identified, was also maced by the Proud Boys as he attempted to assist Shields. Miles and the other man could be seen in visible distress shortly after the incident.

“My eyes and face felt like it was on fire,” Miles said.

The police allowed the Proud Boys to leave while detaining Shields, but eventually released him without charges.

Shields said he was angry about the way the police handled the incident.

“If it was African Americans, they’re not going to get to walk off like this,” he said. “If it was the opposite, it would be an arrest. That’s not fair.”

Proud Boys membership is open to men of all races. The organization claims to promote “Western chauvinism” but also to oppose racism, while at the same time opposing “anti-white guilt.” Members are openly hostile towards Black Lives Matter, slandering the movement as “Burn Loot Murder.” Much like right-wing opponents of the 1960s Civil Rights Movement, the Proud Boys promote a specious narrative that Black Lives Matter protesters are unwitting dupes of a “globalist” conspiracy to weaken and destroy the United States.

It’s a distinction likely lost on most of those exposed to their violence and destruction.

On Saturday, Proud Boys ripped down a Black Lives Matter banner from Asbury United Methodist Church, a historically Black congregation that rose to prominence in DC during the Reconstruction era. The Proud Boys doused the banner with lighter fluid and incinerated it in the street outside Harry’s Bar to cries of “fuck antifa” and “fuck BLM.”

Rev. Ianther M. Mills noted in a statement released on Sunday morning that the church’s forebearers have maintained their faith through the Underground Railroad, Jim Crow and the Civil Rights Movement, adding, “And now we face an apparent rise in white supremacy.”

It was especially painful to see the church’s name in flames as she watched the video on Twitter, she said, describing it as “reminiscent of cross burnings.”

Mills noted the double standard applied to the Proud Boys by law enforcement.

“Sadly, we must point out that if this was a marauding group of men of color going through the city and destroying property, they would have been followed and arrested,” she said.

“We are especially alarmed that this violence is not being denounced at the highest levels of our nation, and instead the leaders of this movement are being invited to the White House.”

Mills said the attack will not deter the congregation’s commitment to racial justice.

“We will move forward, undaunted in our assurance that Black Lives Matter,” she said, “and we are obligated to continue to shout that truth without ceasing.