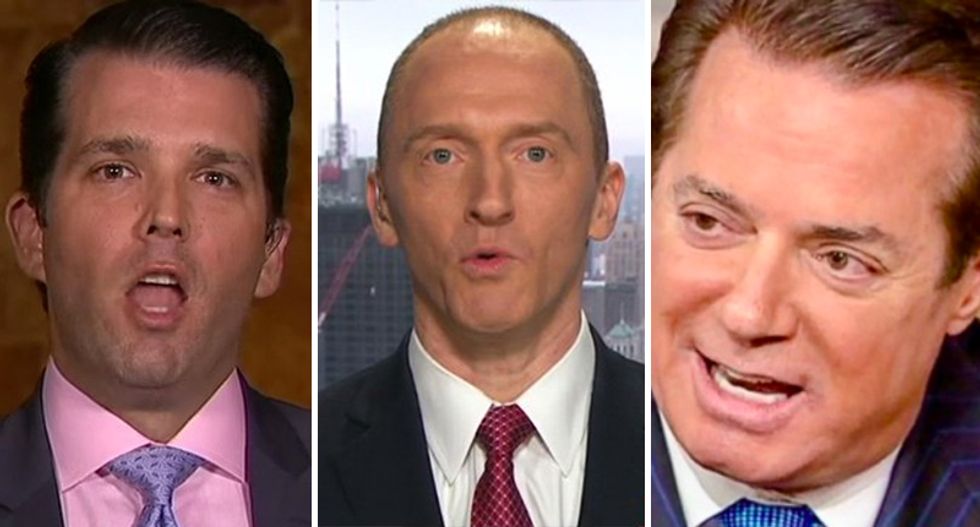 The recent revelation that Donald Trump Jr. met with a Russian attorney with close ties to the Kremlin is just another in a long line of coincidental meetings that President Donald Trump's friends, family, and associates had with Russians.

A number of people close to Trump have claimed they never had contact with Russian operatives -- only for their denial to be proven wrong later. Below is a list of some of the most prominent people:

The most recent in the list of Trump allies is Trump's own son. In a March interview with the New York Times, he denied having any campaign-related meetings with Russian nationals.

“Did I meet with people that were Russian? I’m sure, I’m sure I did,” he said. “But none that were set up. None that I can think of at the moment. And certainly, none that I was representing the campaign in any way, shape or form.”

The New York Times reported Saturday that Trump Jr., Donald Trump's son-in-law Jared Kushner and former campaign chair Paul Manafort met with Natalia Veselnitskaya, who had claimed that she had information on former Secretary of State Hillary Clinton. Trump Jr. has admitted he attended the meeting to see what the "dirt" was, but that the conversation resulted in nothing meaningful.

Rep. Brad Sherman (D-CA) noted that the meeting is important because it was the first indication that someone in the campaign demonstrated they were willing to collude with Russians.

While under oath in his Jan. 10 confirmation hearing, Attorney General Jeff Sessions was asked by Sen. Al Franken (D-MN) about any connections to Russians.

Sessions replied that he "did not have communications with the Russians" during the campaign. He also made the same statement in writing on the official questionnaire. He was told that any communications he had "as a senator" did not need to go on the form since that was as his capacity as an elected official.

Sessions met with Russian Ambassador Sergey Kislyak at least twice during 2016. One meet up was even photographed during the Republican National Convention, where Sessions was taking meetings for Trump. The second took place in September.

No one has denied the Russian collusion or connections more publicly than Vice President Mike Pence, who was allegedly setup to lie on national television just before Trump was inaugurated. Specifically, Pence claimed that retired Lt. Gen. Michael Flynn never discussed sanctions with Russian Ambassador Sergey Kislyak during their introductory phone calls.

While Pence might try to maintain plausible deniability, the evidence is stacking up that over and over Pence was warned about Flynn's contacts with Russia. In May, it was revealed that Flynn was warned by the transition team about his contacts with the Russian Ambassador on the day then-President Barack Obama issued sanctions against Russia for hacking. Pence was the head of the transition team after Gov. Chris Christie (R-NJ) was replaced.

Before the inauguration, Pence was sent a letter by Rep. Elijah Cummings (D-MD) warning the transition that Flynn had concerning lobbying contracts.

It was also revealed that acting Attorney General Sally Yates warned White House Counsel Don McGahn that Flynn's communications with Russians put him in a compromised position. She had two in-person meetings and one phone call specifically because she was concerned about Pence's comments on "Face the Nation."

When Yates testified before the Senate Intelligence Committee in May, she said that she told White House officials on Jan. 26 that Pence deserved to know that Flynn had not been truthful about his communications with Russian officials. Flynn was not asked to resign until Feb. 13.

“Either they were criminally negligent — or they weren’t and they knew,” MSNBC's Rachel Maddow said about Pence and the Trump team in March.

Flynn told anyone who asked him about his communications between the Russian Ambassador Kislyak that he didn’t recall the issue of sanctions coming up, but “isn’t completely certain.”

It was further found that Flynn lied to investigators about payments from work that Flynn had done with Russians so that he could get his security clearance.

To gain his top-secret security clearance, Trump's son-in-law was required to disclose any encounters with foreign government officials for the past seven years. Kushner did not list at least three such meetings.

Kushner's attorney said that the omission of dozens of contacts with Russians was nothing more than an error. It's also a lie.

Kushner's first meeting that we know of came during that June 9, 2016 meeting with Veselnitskaya, in which he, Trump Jr. and Manafort were told the Kremlin-linked lawyer had damaging information on Clinton.

Another meeting was in December with Ambassador Kislyak and the third was with the leader of the Russian state-owned bank Vnesheconombank, which was arranged at Kislyak's command.

Kushner's attorney claims that the form was submitted prematurely and that they informed the FBI they would be sending supplemental information. In the absence of that information, Kushner was then issued an interim clearance.

After the evidence was revealed that Kushner lied about the meetings, Rep. Adam Schiff (D-CA), ranking member of the House Intelligence Committee, called for Kushner to lose his top-secret clearance until questions can be answered.

In a July 2016 interview with George Stephanopoulos on ABC's "This Week," Paul Manafort claimed that there were no ties between him or Trump's campaign and Putin.

"That's absurd...there's no basis to it," Manafort said.

In another July interview, this time with CNN's Erin Burnett, Manafort swore that any allegations about links between Putin and Trump, including his own personal role, was “crazy.”

Also around that time, Manafort was asked in a "CBS This Morning" interview if Trump had any financial relationships with Russian oligarchs.

"That's what he said. That's what I said, uh, that's obviously what my position is," Manafort stammered.

All of that was a lie.

In March, the Associated Press broke a story that Manafort “secretly worked for a Russian billionaire to advance the interests of Russian President Vladimir Putin a decade ago and proposed an ambitious political strategy to undermine anti-Russian opposition across former Soviet republics.”

The AP quoted “interviews with several people familiar with payments to Manafort and business records obtained by the AP,” who revealed Manafort’s secret work for Putin. It “appears to contradict assertions by the Trump administration and Manafort himself that he never worked for Russian interests,” the AP said.

In a Feb. 2017 interview with Judy Woodruff on the PBS NewsHour, foreign policy advisor Carter Page said that he had “no meetings” with Russian officials last year.

Page later told MSNBC's Chris Hayes, “I do not deny” meeting with the ambassador last summer in Ohio at the RNC convention.

“I will say I never met him anywhere outside of Cleveland. Let’s just say that much,” he added.

It was then revealed that Page went to Russia with a secret recording of Trump asking Putin to hack the 2016 election.

Gordon is the person we have to thank for the Republican Party relaxing their opposition to the Russian occupation of Ukraine. He swore in Jan. 2016 that he never met with any Russian representatives.

By March 2017, Gordon said, “he and other national security advisors met with the Russian Ambassador in Cleveland during GOP convention.”

While close friend and Trump ally Roger Stone had communications with those involved in the Russian hack, he didn't lie about it, in fact, he bragged about it. Similarly, spokespeople like Sarah Huckabee Sanders and Sean Spicer lied on behalf of the White House many times on television, but there is no evidence that shows they knew they were lying at the time.

When it comes to Chief of Staff Reince Priebus, it is still unclear of what he knew and when he knew it. While he also lied on behalf of the RNC and Trump White House, it's unclear what he was told. During a Feb. 19, 2017, appearance with Chris Wallace, Priebus was asked if the Trump team had any connections to Moscow. He gave a blanket "no." This denial came just six days after Flynn resigned. It is unknown what all Priebus knew about those connections to Russia that have been revealed since. Coincidently, Priebus first met with Trump on June 9, 2016, after Trump officially scored the GOP nomination. That was the same day the meeting with Kushner, Manafort and Trump Jr. took place with the Russian attorney.

It is unclear if there are others close to Trump, but the list might expand as the investigations continue.