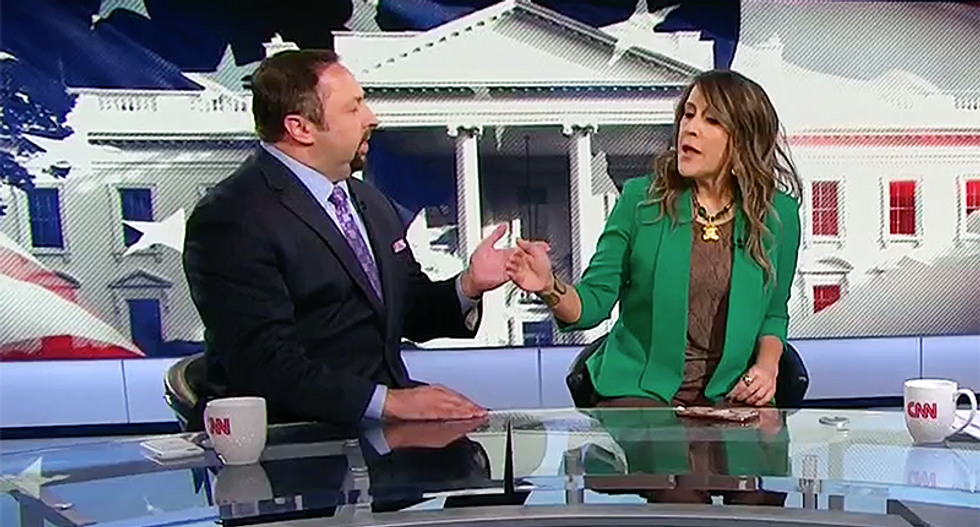 Given the slew of Republicans on cable news blaming Democrats for the lack of a deal on Deferred Action for Childhood Arrivals (DACA), it seems to be the talking point of the day. But when Jason Miller tried to spin for President Donald Trump, it didn't go well.

"What is he talking about?" host Brianna Keilar asked. "He's creating this -- 'The country's being stolen,' he says. Border crossings in 2017 were down by half. The specifics do not match reality."

Miller explained that it was the Democrats who "walked away from putting together some sort of DACA deal."

"The president doesn't only not care about this issue, he's completely clueless when it comes to facts regarding immigration policy," she said. "He doesn't care about these kids. He never has. He's only there to use them as pawns, he talked about them during the campaign many times, 'I agree with you on this,' 'has been a priority for this president,' but he's talked about deporting them. And building a wall. This was never about having a bill that was full of heart, the way he talked about. He's always been about using these kids to placate his anti-immigrant base. What he did this weekend was I think just completely heartless, which, again, goes to what his personality really is."

She noted Trump's dinner with Fox News host Sean Hannity and listening to Ann Coulter bashing him for immigration, "That's what he's responding to. He's not responding to the facts."

Miller swore most Americans wanted a secured southern border. Cardona was armed with facts citing surveys and polls noting Americans want an immigration solution that is thoughtful to DACA youth. Miller tried to clam that Democrats wanted a DACA solution now and would only talk about the boarder wall later.

"That's not true, Jason," Cardona cut in. "Why did the president say--"

"They walked away," Miller said of Democrats.

He refused to agree with her on the facts, which she repeated over and over. The two shouted over each other until ultimately Miller was reduced to somehow blaming Hillary Clinton.

"That line of thinking didn't work for Hillary Clinton in 2016 and doesn't work now," he said.

"What are you talking about? We're not talking about Hillary Clinton," Cardona laughed. "I mean, that tells me you have absolutely no argument because you can't argue about the facts."