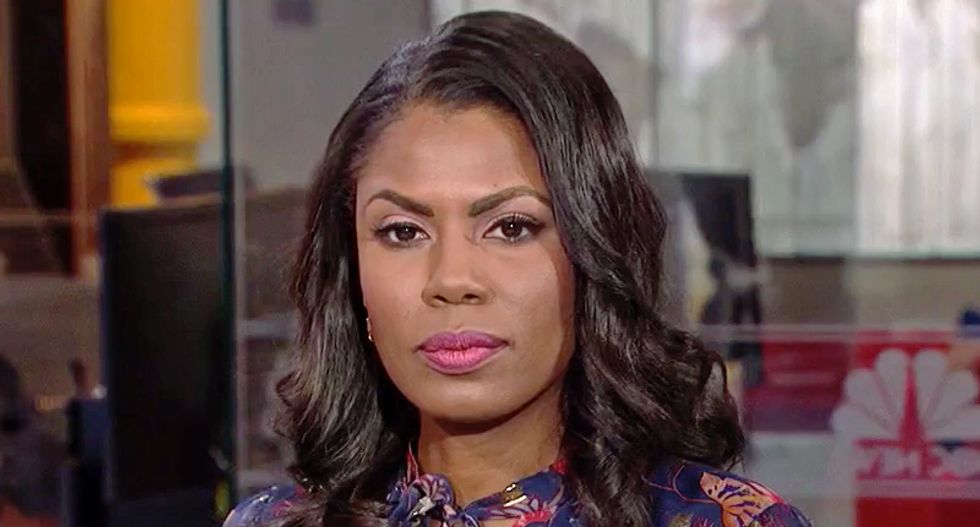 Former senior White House aide Omarosa Manigault-Newman walked out of an interview with "Bernie and Sid in the Morning" on 77 WABC.

"Donald Trump is not equipped to serve in the role that he is in," she said. "In fact, I would say that he is unfit to serve as president of the United States."

During a conversation with Bernie McGuirk, the co-host called out her "despicable" actions and comments she has made about President Donald Trump.

While Trump might claim everyone is "winning," and promising people would get "tired of all the winning," Newman said that the president and the country are all losing.

"We are losing right now because Donald Trump is disingenuous about his engagement and his outreach," she continued. "In fact, I believe, he wants to start a race war in this country."

Before the interview even began, the hosts had callers who accused her of stabbing the president in the back.

Rosenberg explained that the world knows what Newman did and they wanted to give her an opportunity to defend herself.

"And if you don't believe her, and I don't, then fine," Rosenberg said.

Newman alluded to someone in the Vice President's Office is involved in the op-ed, saying that it hasn't been a secret she thinks something is going on there. Mike Pence has denied that he had anything to do with it, but many speculated online Wednesday that it was someone connected with the man.

"I would say I could narrow it down to Pence's office," she said. "The writer, if you read the op-ed, is very specific about being a staffer. I believe, having served as an official for the president, I believe it's a staffer. I don't believe it is someone who is at the president or vice president's level. But because of the choice of words, it is very similar to the speaking style and patterns of someone who would work around the vice president. That's my opinion."

The men began by asking her to say something positive about Trump. She complied but noted that she saw something transform in the president "the moment he became the leader of the free world."

Rosenberg said that when he first watched her on Chuck Todd's show, he saw her as someone who was "full of it" and nothing more than a "bitter" and "angry" woman striking back. However, the more she talks, the more Rosenberg said he saw some possible truth. It was only after she was fired that she struck out against the White House. So, it's reasonable for them to see her as nothing more than a "bitter lady."

She explained that the person can read her book and decide for themselves, but that Americans deserve to know what is happening in the White House.

"They deserve to know. The American people have a right to know what is going on," she said.

She went on to say that the reason she released her tapes is that the White House came after her, saying she had no credibility.

"Well, the tapes have credibility," she quipped.

But it was McGuirk that went after her, saying that she smeared Trump personally, including his marriage. He quoted activists online saying that Trump calling Newman a "dog" was an insult to dogs and should be a "snake" or a "rat" instead.

"You actually said Trump covets his daughter. He wants to have sex with his daughter," McGuirk said. "Can you understand why people would think, and Trump would think, that after what he did for you, was so despicable?"

It devolved into an argument from there.