REVEALED: 'Unindicted co-conspirator' in pivotal Proud Boys case is former VP of the Philly chapter -- and may be an FBI informant 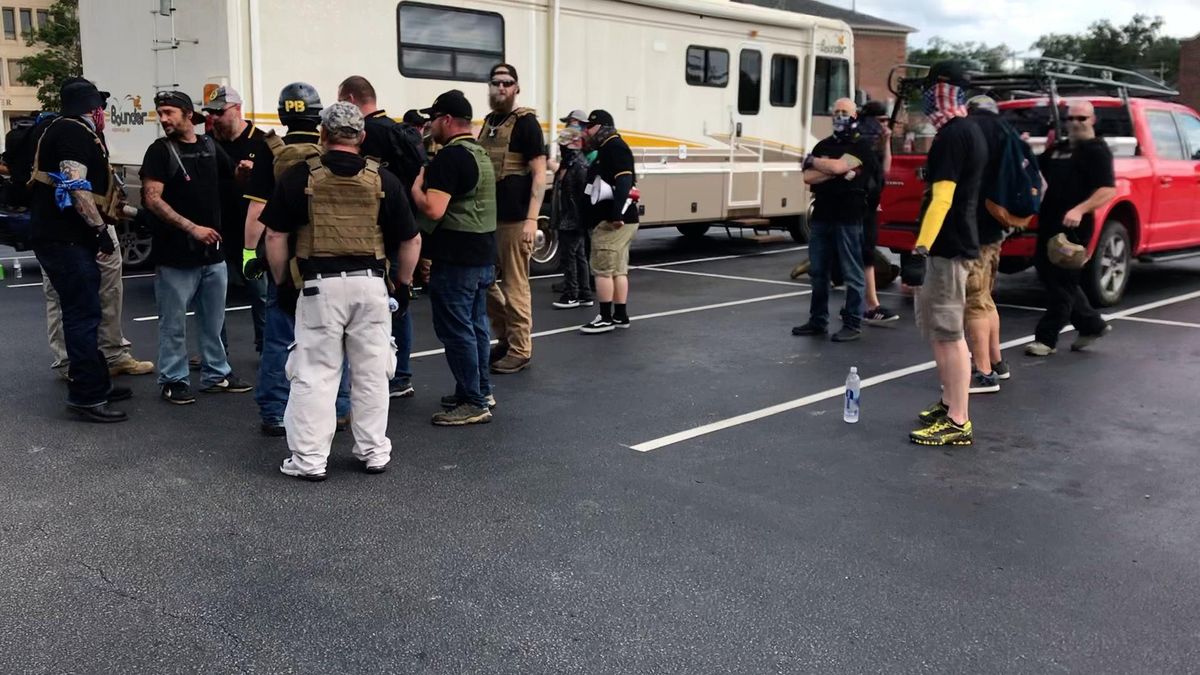 Members of the Philadelphia chapter of the Proud Boys. (Photo by Jordan Green)

An unindicted co-conspirator involved in the Proud Boys' planning for the Jan. 6 gathering that led to the siege of the US Capitol is Aaron Whallon-Wolkind, the former vice president of the nationalistic pro-Trump street gang's Philadelphia chapter.

Whallon-Wolkind's identity as the unindicted co-conspirator was first reported by Alan Feuer, a reporter for the New York Times, on Twitter on Thursday. A knowledgeable source speaking on condition of anonymity provided the same information to Raw Story.

Federal prosecutors have described how an encrypted messaging channel named "Boots on the Ground" was created for Proud Boys communications in Washington DC on Jan. 6 that grew to include more than 60 users, including an individual identified by the government as "Unindicted Co-Conspirator 1."

The unindicted co-conspirator seems to speak with authority in a message to "Boots on the Ground" and to a separate "New MOSD" channel on the evening of Jan. 5, which came a day after Enrique Tarrio, the organization's national chairman, was arrested on charges of property destruction and banned from DC.

"Stand by for the shared baofeng channel and shared zello channel, no Colors, be decentralized and use good judgement until further orders," the unindicted co-conspirator wrote at 9:09 p.m. on Jan. 5, according to the government. "Rufio is in charge, cops are the primary threat, don't get caught by them or BLM, don't get drunk until off the street." "Rufio" is the nickname for Ethan Nordean, a Washington State member who faces conspiracy charges as part of a quartet of Proud Boy leaders that also includes Zachary Rehl, who is the president of the Philadelphia chapter, along with Joseph Biggs and Charles Donohoe.

Nicholas Smith, Nordean's lawyer, told a federal judge during a hearing on Thursday that he wants the government to disclose the name of the unindicted co-conspirator.

"The reason it's important is that if it's who we think it is, there's public information showing this person was at one point a government informant," Smith said. "The government is relying on his statement to keep the defendants detained."

Reached by Raw Story on Friday, Smith declined to comment.

A Reuters report previously identified Whallon-Wolkind as a Telegram user with the screenname "Aaron PB," who wrote to another user named "Zack Pb" in January 2019: "I know, another chat, but this one is for info we want to send our FBI contact. Specifically, he wants things we can tie to criminal activity."

FBI Director Christopher Wray lamented in testimony to the Senate Judiciary Committee in March that the agency did not have better intelligence about the Proud Boys in the lead-up to the Jan. 6 siege, saying, "We are focused very, very hard on how we can get better sources, better information, better analysis." But there's an extensive history of Proud Boys maintaining contact with the FBI and feeding agents information about antifascists adversaries prior to Jan. 6 that includes Biggs.

Antifascist researchers had previously disclosed that Whallon-Wolkind was the vice president of the Philadelphia chapter. Whallon-Wolkind and Rehl are among a group of East Coast far-right activists who are currently plaintiffs in a lawsuit alleging that a doxing campaign to get them fired from their jobs amounts to extortion. Patrick Trainor, who represents Whallon-Wolkind in the suit, declined to pass along a request for comment from Raw Story to his client. And Trainor declined himself to comment on the information that Whallon-Wolkind is the unindicted co-conspirator in the Proud Boys leadership conspiracy case.

Luke Matthew Jones, one of the government prosecutors, told Judge Timothy J. Kelly on Thursday that the government has turned over an FBI report with the unindicted co-conspirator's screenname to defense counsel, but he added, "It's our position that we're not obligated to produce that person's name at this time."

Jones also told the court that he "did confirm that person was not a CHS," or confidential human source, commonly known as an informant.

A log of Proud Boy communications previously released by the government shows that Whallon-Wolkind told other Proud Boys worried about their security being compromised following Tarrio's arrest that it would be a waste of time to delete chats.

"We went through this when [REDACTED] flipped over to antifa," Whallon-Wolkind said on Jan. 4. "Regardless Google and apple key log everything that you type into your phone anyways."

Raw Story identified Whallon-Wolkind as the author of the chats by cross-referencing the length of the redacted screenname with that of a separate comment that has already been publicly attributed to "Unindicted Co-Conspirator 1."

In another chat, around the same time on Jan. 4, Whallon-Wolkind appears to reference an unidentified person who is trying to get to DC for the Jan. 6 event.

"If they can get a flight to Philadelphia instead we can probably get them there," Whallon-Wolkind wrote.

There's no evidence that Whallon-Wolkind himself was in DC on Jan. 6.

But the chats released by the government show that Whallon-Wolkind wrote, "Storming the capital building right now!!" And two minutes later: "Get there."

Regardless of whether anything said by the unindicted co-conspirator provided the basis for keeping the four Proud Boys leaders locked up pending trial, the government has publicly submitted ample evidence to support its claim that the danger to the community posed by Nordean's prospective release justifies detention.

"As explained in detail on the record," Judge Kelly wrote in a detention order issued against Nordean in April, "given the allegations of political violence against him in the events of January 6, his role as a leader and organizer in a network that frequently creates events with large numbers of people, his planning experience and skills, his history of concealing his communications and activities from law enforcement, the circumstances surrounding his lost passport and stolen firearm, and his lack of regret or remorse for the events of January 6, the court finds that he poses an identified and articulable threat to public safety that is both concrete and prospective and that cannot be mitigated by any conditions of release short of detention."
Raw Exclusives SmartNews
Report typos and corrections to: corrections@rawstory.com.
#story_page_post-content_regular-site
READ COMMENTS - JOIN THE DISCUSSION