The storming of the US Capitol by fanatics in thrall to Donald Trump was the inevitable result of un-checked conspiracy theories. And Trump's enablers and sycophants are wasting no time spinning new conspiracy theories out of the attempted coup.

Jake Angeli, a well-known QAnon evangelist from Arizona, has become Exhibit A in the revisionist effort to frame the mob that overran the Capitol building as an "antifa" false flag. With his buffalo horn helmet and fur bonnet, face paint and bare chest, Angeli created an instantly meme-worthy impression huddling in the hall of Congress and striking a pose behind the dais on the Congressional floor in the Senate chamber. 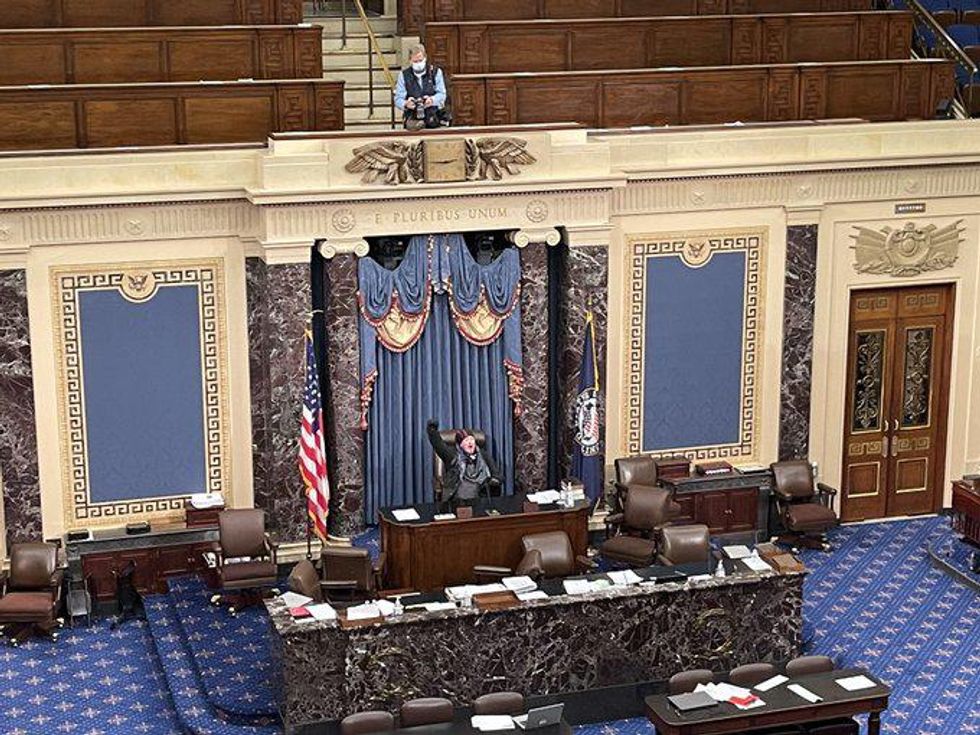 Lin Wood, the Atlanta personal injury lawyer who has been pumping up Trump's efforts to overturn the election, tweeted at 4:44 p.m.: "Indisputable photographic evidence that antifa violently broke into Congress today to inflict harm & do damage. NOT @realDonaldTrump supporters." The tweet included an image file with two side-by-side photos, one showing Angeli aka Buffalo Dude conferring in the halls of Congress with a long-haired, bearded man, and the other showing a similar looking long-haired, bearded man posing with yet another man, accompanied by the inscription "phillyantifa.org." Despite the similarities in appearance, the two men are not the same. 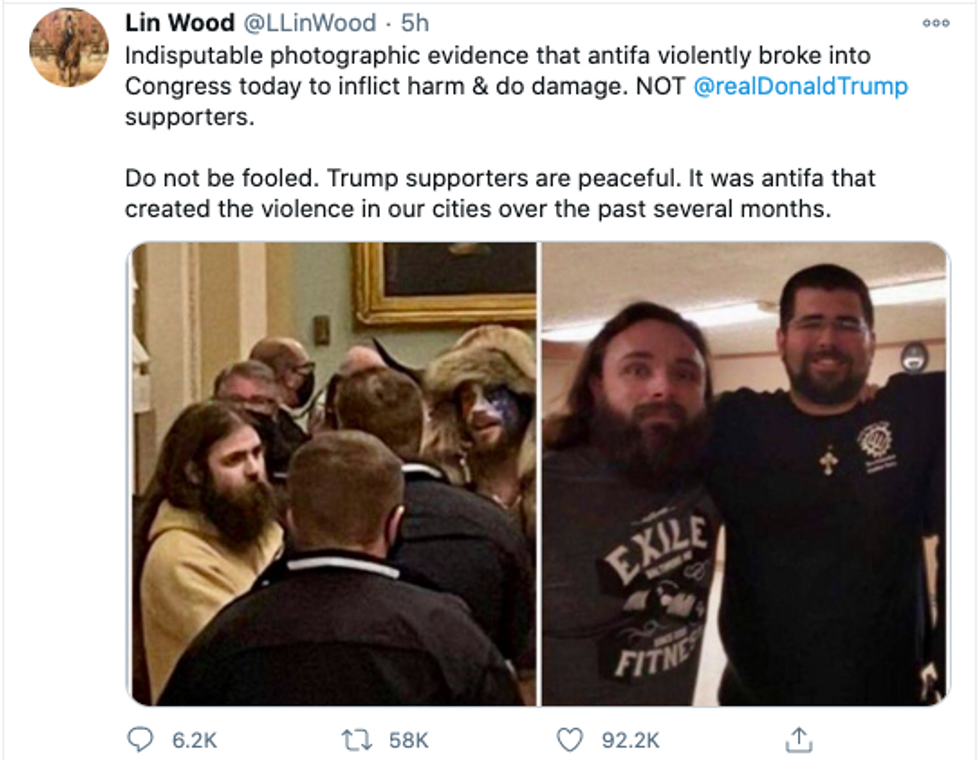 The second image appears to have been lifted from a September 2018 dox published by Philly Antifa of Maryland Skinheads co-founder Jason Tankersley. The man posing with Tankersley is Matthew Heimbach, the leader of the now-defunct white supremacist group Traditionalist Worker Party. The "antifa" inscription under the photo, which it should be emphasized has no connection at all to today's chaos at the Capitol, is not an indicator that the two men are members of antifa but rather that they are targets of harassment by antifa.

While Trump allies are falsely depicting Angeli as an antifa provocateur, Proud Boys Chairman Enrique Tarrio, who is banned from DC as a condition of release for his misdemeanor property destruction and weapons charges, celebrated him as a "hero" on his Parler account. In a post showing a grainy photo of Angeli standing behind the dais, Tarrio even bestowed his organization's honorary salute: "Proud of Your Boy!"

Joe Biggs, another Proud Boy who holds a high profile in the organization, sent a different signal on his Parler page. Along with Woods, Biggs re-shared a tweet by Paul Sperry, an Islamophobe and conspiracy trafficker. Without substantiation or sourcing, Sperry tweeted at 5:02 p.m.: "BREAKING: FBI agent on the ground at US Capitol just texted me and confirmed that at least 1 'bus load' of Antifa thugs infiltrated peaceful Trump demonstrators as part of a false Trump flag ops."

Rep. Paul Gosar, the congressman whose objection to counting the electoral ballots from Arizona early this afternoon abetted the rioters' fantasy about overturning the election, tweeted at 5:04 p.m.: "This has all the hallmarks of Antifa provocation." Gosar's tweet linked to a tweet by Stop the Steal organizer Mike Coudrey.

Coudrey's tweet, which has since been removed, showed footage of Trump supporters busting out a window and entering the Capitol building, with the text, "Eye witness reports that the first individuals who stormed the Capitol where [sic] 'dressed up and had knee pads.'"

Gosar's tweet, in turn received an approving share from Tommy Robinson, an English far-right campaigner who maintains friendly relations with the Proud Boys and is an avid Trump supporter.

While much of the Trumpworld discourse around the Capitol riot resembles a snake eating its tail, other far-right figures are doubling down on insurrection.

Jeremy Bertino, a prominent North Carolina Proud Boy who was hospitalized after getting stabbed on Dec. 12, has frequently appeared at Tarrio's side over the past year, from the Second Amendment rally in Richmond, Va. in January to the Proud Boys' Fourth of July foray later that year in DC. In contrast to Biggs' deflections onto "antifa" and Tarrio's somewhat whimsical celebration of Angeli, Bertino has maintained a consistently defiant tone in his Parler posts over the course of the afternoon and evening. "The House is meeting again," he fumed at about 7 p.m. "We failed. NEVER FUCKING BACK DOWN."

After Trump released a video asking his supporters to "go home," Bertino wrote on Parler: "DO NOT GO HOME. WE ARE ON THE CUSP OF SAVING THE CONSTITUTION. STAY ON THE GROUNDS, PATRIOTS."

Earlier, Bertino had double-posted a graphic video of a woman bleeding in the hallway of the Capitol after being shot. The woman, who has been identified as Ashli Babbit, has died, according to news reports.

"Those cowards shot an unarmed woman," Bertino wrote on Parler. "He added, "1776," a code in the militia movement for violent insurrection against supposed government tyranny. In another post, he wrote, "Woman shot by cowards protecting traitors. Hang them on the Capitol steps."

Commenters in the thread bristled with calls for retribution: "Time to shoot back!" "And so the war begins." And, "Shoot back. Guns are for us to protect ourselves against government."

Babbit is emerging as a martyr for the far right.

"We lost our first patriot today," one person commented on Bertino's page. "Cement that in our memories."

"2nd shot heard around the world," another responded.

Some of the commenters even turned on the president, signaling that their anti-democratic revolt goes beyond Trump.

"And we've got President Trump coming out saying how good the Capitol police are that would shoot an unarmed woman f*** him *f*** [Pence] and f*** the House and Congress," one man said.

A woman in the thread mused, "The president and his whole family are starting to look like controlled opposition at this point. All calling for no violence and to stand by Capitol police as those same Capitol police attack and have now shot Trump supporters."

Trump's inflammatory speech at the Ellipse and encouragement for his followers to march on the Capitol as Congress met to certify the electoral vote has inflicted substantial damage on the Republican Party, which with the election of two Democratic senators from Georgia has also lost control of the Senate. While the president has disgraced himself, his supporters' rampage through the Capitol has likely electrified the far right.

In one potential sign of things to come, Brien James, a former white supremacist skinhead who co-founded American Guard and organizes with Proud Boys in Indiana, posted a celebratory video on the social media app Telegram.

The short video shared at 2:49 p.m. scanned a barroom in the Midwest, showing dozens of men dressed in the Proud Boys' trademark black and yellow colors. They cheered at a newscast on a mounted television.

"My guys watching patriots storm the capitol," James wrote. "We are loading up and headed out."