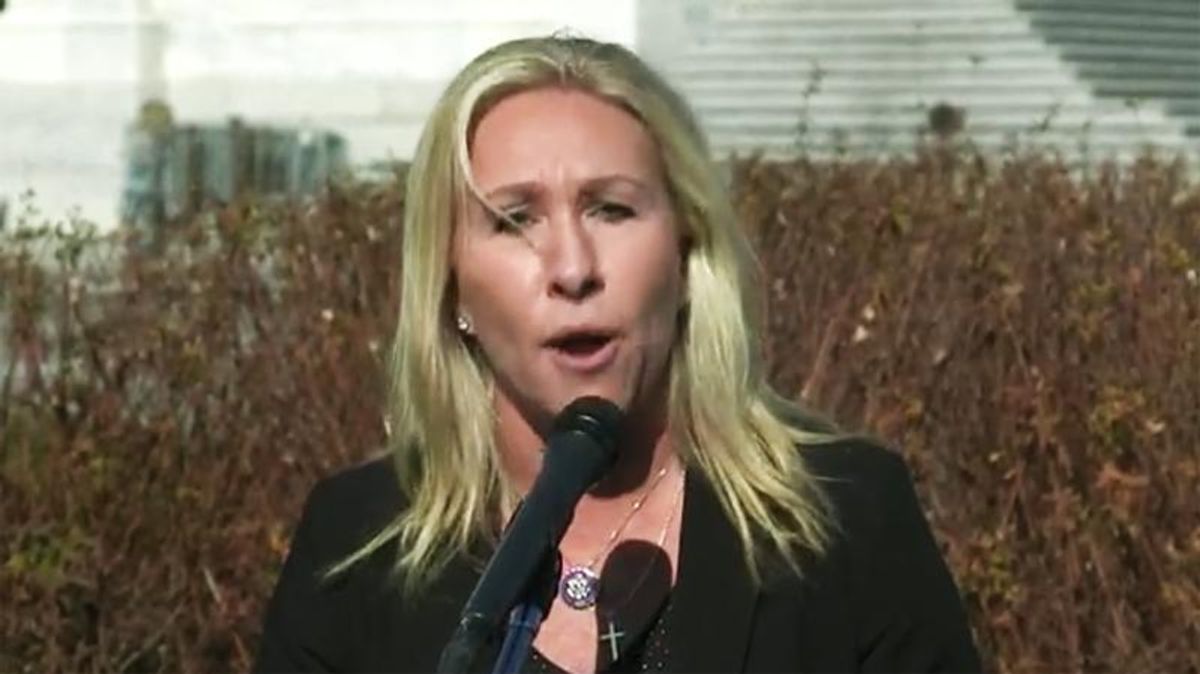 Case in point: Gosar's attendance at a white supremacist's meet-up after he spoke at the conservative CPAC conference in Florida almost two weeks ago.

"The House GOP has so far confronted no large-scale blowback from Gosar's speech to the America First Political Action Conference, or from other incidents that link a few of its members to far-right imagery or rhetoric," Politico's Melanie Zanona and Olivia Beavers wrote before adding, "But some fear that if the conference — which just ushered in a historically diverse freshman class — doesn't stomp out those political brush fires now, there's a risk they will spread and engulf the party."

According to Rep. Liz Cheney (R-WY) who has incurred the wrath of Donald Trump for voting for his impeachment, "I think the organization that [Gosar] spoke to is one that has expressed views that are clearly racist … This is not the kind of an organization or an event that other members of Congress should be participating in. I've been very clear about the extent to which we have to stand against white supremacists, stand against anti-Semitism. And that should not be part of our public discourse."

Addressing Gosar's consorting with white supremacists, the spokesperson for House Minority Leader Kevin McCarthy issued a brief statement saying, "There is absolutely no place for racism in our discourse or society."

"The episode comes as most Republicans also voted, but failed, to keep freshman Rep. Marjorie Taylor Greene (R-GA) in her committee assignments after she circulated conspiracy theories and endorsed social media posts calling for violence against Democrats," the report continued. "Now, Republicans are questioning whether the embrace of far-right groups by federal lawmakers is giving power to organizations that had previously been stifled on the national stage."

According to one GOP lawmaker who did not want his name used, "It's really disgusting, nefarious stuff. And this is the stuff you have to just actively beat back."

The inability to get GOP lawmakers -- particularly in the House -- to drop the conspiracy theories that appeal to Donald Trump's rabid base is handing Democrats a powerful weapon with 2022 already on the horizon, with Politico reporting, "Democrats are already trying to make QAnon, the far-reaching conspiracy theory labeled as a domestic terrorism threat by the FBI, the face of the GOP ahead of the midterms."

"This year isn't the first time House GOP leaders have faced problematic right-wing members in their ranks. Former Rep. Steve King (R-Iowa) — who also spoke at AFPAC last week — espoused white nationalist views and other controversial beliefs during his time in office, but it took years for Republican leaders to punish him by kicking him off his committees. When King finally lost his primary in 2020, party leaders sighed with relief," the report adds. "Today there is a growing cohort of members who could create King-like headaches for GOP leaders. Aside from Greene and Gosar, freshman Rep. Lauren Boebert (R-Colo.) has associated with far-right gun groups; freshman Rep. Madison Cawthorn (R-N.C.) has faced scrutiny for past social media posts about Adolf Hitler, which he later said were a mistake; and Reps. Andy Biggs (R-Ariz.) and Mo Brooks (R-Ala.) were ringleaders of the effort to challenge the election certification in Congress."