On Monday, news reports heralded the social media app TikTok for aiding the rescue of a kidnapped North Carolina teen. The teen signaled to a passing car using a hand signal she learned from the app, and a driver caught on and notified police.

The story shows the power TikTok can have in young Americans' lives, and what the platform can teach them.

TikTok has another side, however, where videos suggest children surrender their freedoms. A Raw Story investigation found the app is rife with videos promoting child marriage, arranged marriage and multiple wives. TikTok also played videos encouraging abusive relationships. One video claimed that girls who reach their first menstrual cycle are adults capable of mature decision making and getting married to an adult man.

"When a girl reaches nine years of age then she is a woman," the video's caption read.

The videos, along with prior Raw Story reports about TikTok recommending content about self-harm, suicide and white supremacy, reveal the galaxy of contentious content TikTok suggests to young teens.

TikTok is a social media app that streams short videos uploaded by users. Owned by the Chinese company ByteDance, the app typically suggests entertaining clips paired to music. Those who dwell on content around certain topics, however, can be served a flood of extreme videos.

Lax U.S. state laws have allowed thousands of adult men to bring child brides into the U.S. over the past decade. Among them was Nalia Amin, who was betrothed at eight years old and forcibly married at 13. Married in Pakistan, Amin applied for her husband to come to the U.S. at the behest of her family.

"I was a passport to him," she said. "They all wanted him here, and that was the way to do it."

Amin said TikTok's child marriage videos are "very harmful psychologically." Children "think this is ok because they see it on TikTok," she said.

New York State raised the age of marriage consent to 18 in July after Amin's grassroots advocacy. Amin campaigns to end child marriage through her organization, the Naila Amin Foundation. 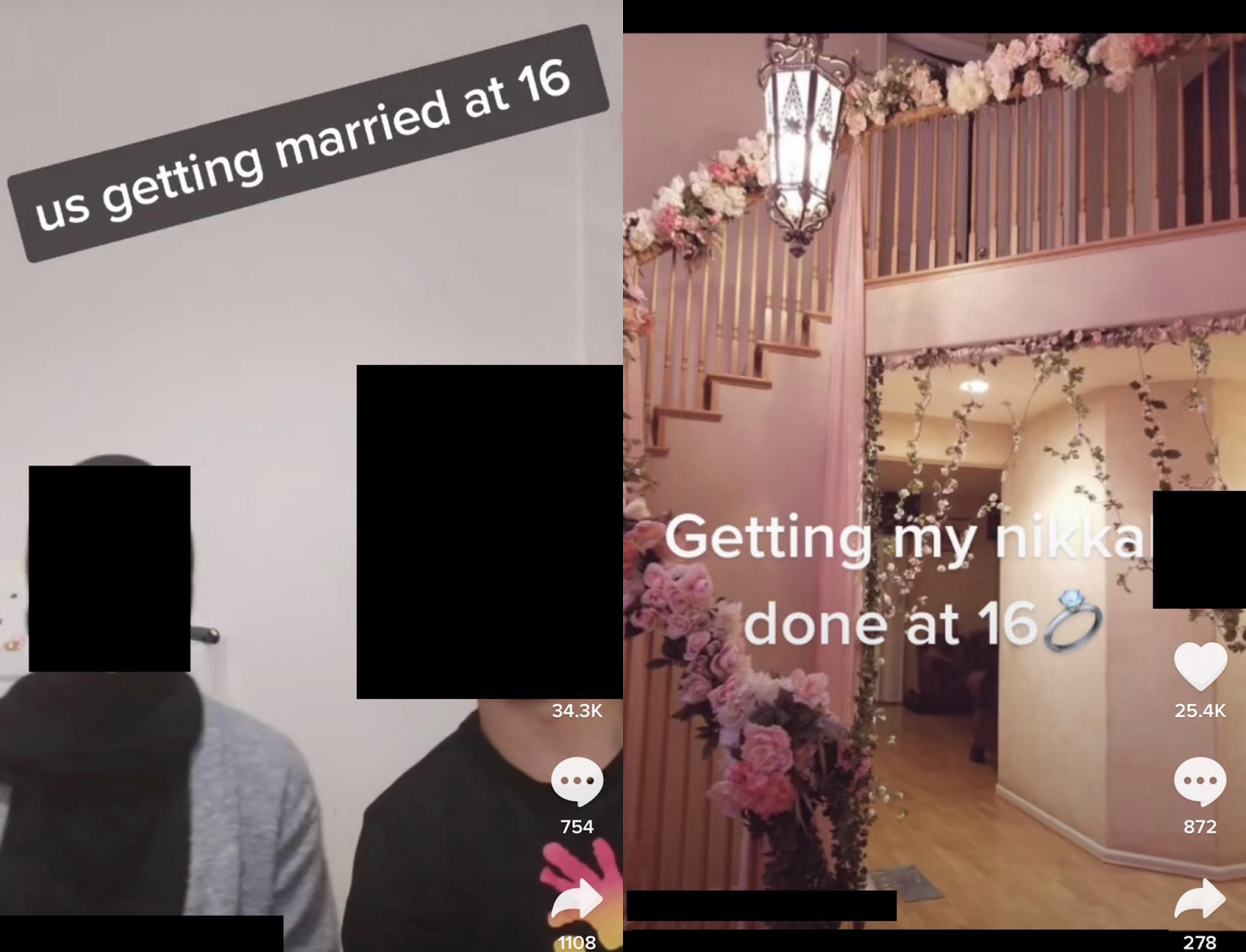 Amin maintains a TikTok account where she speaks out against child marriage and provides resources for those at risk. Her videos receive significantly fewer views than clips promoting child marriage.

"When I use the hashtag #childmarriage or #forcedmarriage those videos are never approved for a promotion," she said. "I have to change the wording to #childrights. I don't know who owns TikTok, but they definitely don't have a problem with the child marriage problem in the U.S."

"I've been shadow banned," she added.

TikTok did not respond to questions about child marriage. While Raw Story found no videos criticizing child marriage on its 13-year-old account, others have used TikTok to speak out against underage matrimony.

Also in this series: Apple, Amazon and Marvel: How TikTok monetizes teens cutting themselves and #PainTok: The bleak universe of suicide and self-harm videos TikTok serves young teens. Have tips about TikTok or internal documents from tech companies? Email techtips@rawstory.com.

TikTok maintains it works hard to keep its platform safe. The company provides a raft of information on its website around safety issues, including suicide prevention, eating disorders and bullying. It has taken steps to increase the default privacy settings for its youngest users, and directs certain search terms to helplines for suicide prevention and eating disorders.

"We seek out feedback from experts and stakeholders to constantly improve," Michael Beckerman, TikTok's head of public policy for the Americas, said in October. "We find areas or find flaws where we can improve, we hold ourselves accountable, and we find solutions."

"Five reasons why our sisters should consider accepting a co-wife," one TikTok user quipped in a video later taken down. Examples included sharing household duties and not feeling pressured to bear too many children.

"Polygyny is a privelege [sic] provided to those men who are exemplary in their treatment of women and wish to aid and support more than one woman," another video claimed. 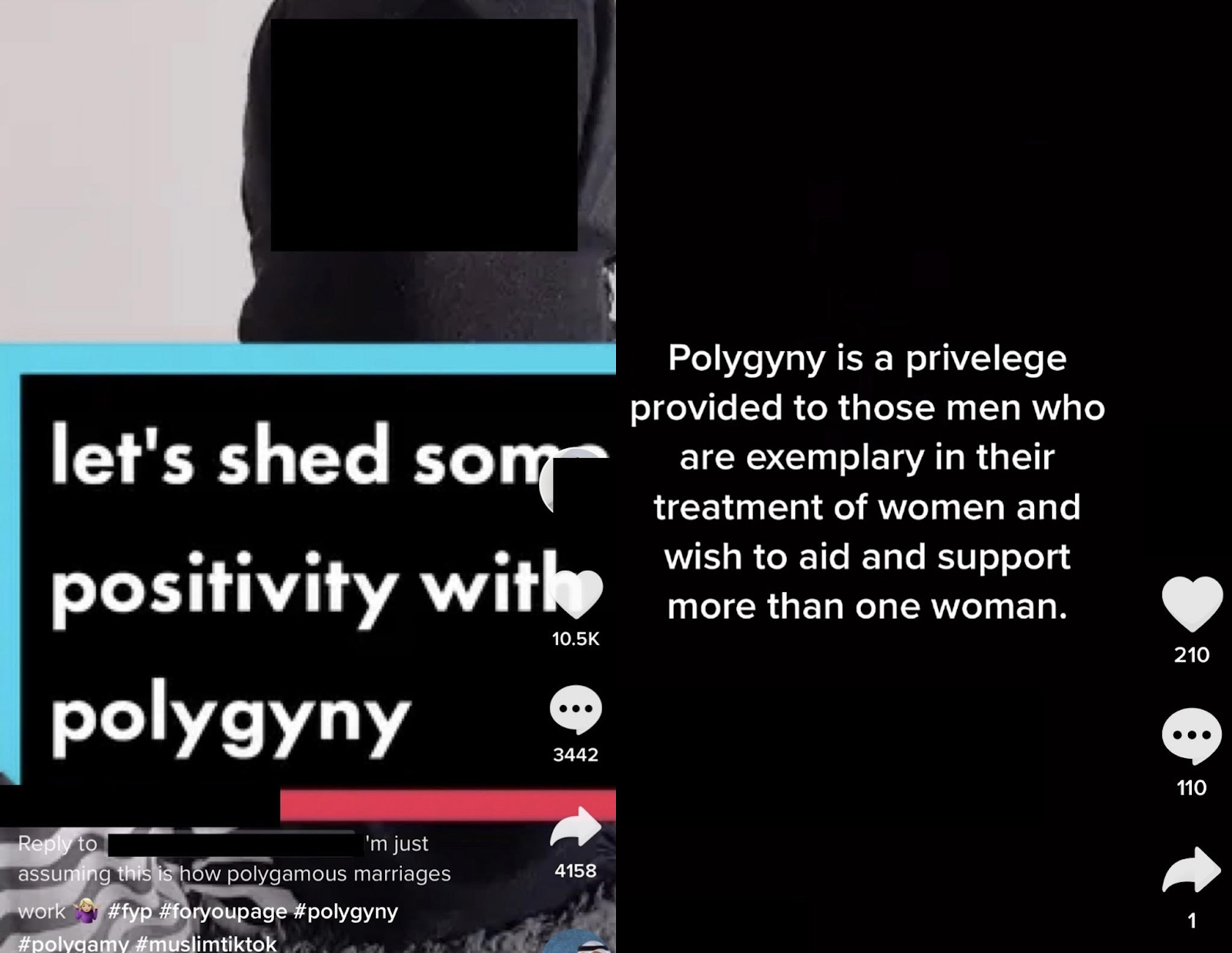 Polygny is the practice of a man taking multiple female mates or wives.

"We got married after meeting twice," read one caption printed across a young woman's face.

Critics of child marriage say it has lifelong implications for minors who don't have the same rights as adults.

"Women who marry before 18 are three times more likely to be physically assaulted by their spouse and 31 percent more likely to end up in poverty in adulthood," said Fraidy Reiss, founder of Unchained at Last, an organization that seeks to end child marriage.

"In cases of domestic violence, it may be difficult to get to a shelter and even filing for divorce or seeking a protective order," Reiss added. "It may also become a nightmarish legal battle because the individual remains a minor and has fewer rights."

According to Unchained, nearly 300,000 children have been married in the U.S. over the past two decades. Some brides were as young as 10. Currently, six U.S. states ban child marriages: New Jersey, Delaware, Pennsylvania, Minnesota, Rhode Island and New York.

"Anyone of any age, of any gender, of any identity, of any background could be a victim of a non consensual marriage," said Hellitz Villegas, a project associate at the Tahirih Justice Center. "Grooming can really occur anywhere and it's definitely and absolutely happening online."

Child marriage often occurs alongside practices like polygyny. While laws outlaw polygamy in the U.S. and Canada, loopholes can include taking on one legal marriage with subsequent wives pronounced under a spiritual marriage contract separate from the law.

"We have a literal TV show called 'Sister Wives,'" Swegman, the project manager, said. "We know there is polygamy being practiced in the Mormon communities in Utah and elsewhere."

"And the thing that comes up a lot for us, is they present significant challenges for any wife who wasn't the first, because they are not considered a legal wife," she said.

Yasmine Mohammed, who was forced into an abusive marriage with a member of Al-Qaeda at 20, escaped her own marriage and now uses her platform to help others who might be at risk.

"My mom was the second wife of what is a hierarchy with the first wife," Mohammed told Raw Story. "And so you sort of internalize that. Second rate status."

"These are things that don't really get talked about because most of the places where this is taking place are in countries and in communities where it becomes so normalized you don't even realize that there's something strange going on," she added. "You just accept it. For me, it happened in Canada."

Mohammed is author of Unveiled and founder of a nonprofit that aids ex-Muslims.

"Anyone who is a second wife or third wife finds themselves in a very precarious legal situation," Swegman said. "They might have zero rights to restitution, to alimony, to child support should they seek to leave."

Studies show polygyny has adverse effects on women's psychiatric health as well as the wellbeing of their children.

"Rivalry and jealousy between co-wives can cause significant emotional problems for children," the Canadian Department of Justice stated in a recent report. "Other studies also note that polygynous respondents have indicated increased stress in the mother-child relationship because of decreased social and economic resources."

Raw Story found in prior investigations that TikTok also promotes videos advocating jihad and white supremacy, clips about suicide attempts and hospitalized anorexic girls to teenage accounts. Others have uncovered pornography. The National Center for Missing and Exploited Children reported 22,692 instances of apparent child pornography on TikTok in 2020 alone.

TikTok, YouTube and Snapchat recently faced lawmakers in a Senate hearing regarding their policies and keeping young users safe. Lawmakers sought support for new child safety legislation, but didn't get clear endorsements from the platforms.

Mary David, a former prosecutor and human trafficking expert, says that while there are resources for parents who want to set social media safeguards, the best solution may be parents having an open dialogue with their children regarding the content they encounter. Even if teens don't have TikTok accounts, she noted, they can still watch videos sent to them.

"It's safety and support that reinforces in the back of their minds that at the end of the day my parents are there for me and I can go to them with my questions," David said.

"Kids aren't going to want to talk to their parents about it, but it's one of those cases where kids will roll their eyes and seem disinterested but they need you there," David added. "As parents, they need you to be that safe space and that guardrail."

Have tips about TikTok or internal documents from tech companies? Email techtips@rawstory.com.