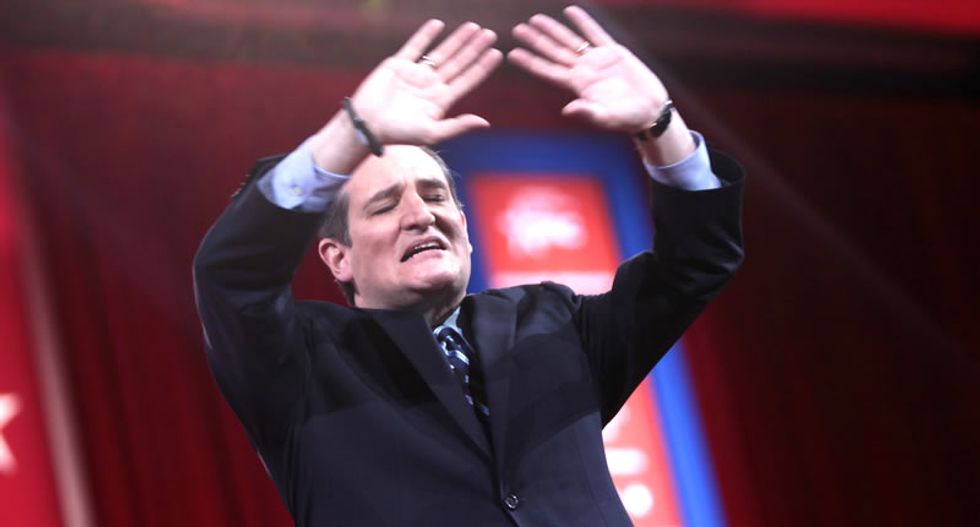 As the clock approached midnight the day before he planned to announce his presidential run, Senator Ted Cruz's official Twitter account informed Americans that there would be "some news you won't want to miss," which denizens of Twitter used as inspiration to create a "#TedCruzCampaignSlogans" hashtag campaign ridiculing the senator's presidential aspirations.

It's not for nothing that they chose to ridicule Cruz, as he has said and done plenty in his short time in office that's worthy of it.

1. "'Net neutrality' is Obamacare for the Internet"

In November of last year, after President Barack Obama announced his support for "net neutrality," Cruz had no choice but to come out against it, tweeting "Net Neutrality’ is Obamacare for the Internet; the Internet should not operate at the speed of government."

2. "Instead of nominating a health professional, he nominated someone who is an anti-gun activist"

In an interview with Candy Crowley, Cruz claimed that the president's pick for surgeon general, Vivek Murthy, wasn't qualified because of statements he had made about the Second Amendment.

3. Obama just a "social worker" who wants to put ISIS "on expanded Medicaid"

In an appearance on Fox News' Hannity, Cruz complained that United States military leaders were taking too many cues from the president. "It’s not our job," he said, "to be social workers in Iraq and put them all on expanded Medicaid. It is our job to kill terrorists who have declared war on America and who have demonstrated the intention and capability to murder innocent Americans."

4. "It is the job of a chaplain to be insensitive to atheists”

Speaking at a home schooling convention, Cruz said that "we have never seen an administration with such hostility to religious faith. Last year, there was a chaplain in the Air Force up in Alaska who wrote in a blog post the phrase ‘There are no atheists in fox holes.’ He was ordered by his supervising officer to take it down. I guess it was deemed insensitive to atheists. I kind of thought it was the job of a chaplain to be insensitive to atheists.”

5. "I didn't threaten to shut down the government"

6. "I will renounce any Canadian citizenship"

After speaking to Donald Trump about a possible run for the White House, Cruz admitted that he was born in Calgary, Canada. However, he told The Dallas Morning News that "I will renounce any Canadian citizenship. Nothing against Canada, but I’m an American by birth and as a US senator I believe I should be only an American.”

7. "I expect them to start quartering soldiers in people’s homes soon"

At the 2013 Values Voter Summit, Cruz said Obama was intent on violating the entire Bill of Rights. "You look at our Constitution, you look at our Bill of Rights, this is an administration that seems bound and determined to violate every single one of our Bill or Rights," he said, adding "I don’t know that they’ve yet violated the Third Amendment, but I expect them to start quartering soldiers in people’s homes soon."

In an interview with the Christian Broadcasting Network, Cruz said that "if you look at other nations that have gone down the road towards gay marriage, that’s the next step of where it gets enforced. It gets enforced against Christian pastors who decline to perform gay marriages, who speak out and preach biblical truths on marriage, that has been defined elsewhere as hate speech, as inconsistent with the enlightened view of government."

Responding to a statement by Senator John McCain that his opposition to immigration reform made him a "wacko bird," Cruz to CBS News that "if standing for liberty and standing for the Constitution makes you a wacko bird then I am a very, very proud wacko bird."

10. "I have never seen a Hispanic panhandler"

On Fox News Sunday in 2012, Cruz told host Chris Wallace that, "in my life, I have never once seen an Hispanic panhandler. In our community, it would be viewed as shameful to be out on the street begging.”

During his "filibuster" of the Affordable Care Act, Cruz took time out to read his daughters a bedtime story. "I don’t get to read it that often because I tell them, ‘Go pick the books you want to read and I read it to them,’” Cruz said on the Senate floor. “But since tonight, girls, you aren’t here, you don’t get to pick the book, so I get to pick Green Eggs and Ham."