Trevor Noah slams 'dangerous' Trump: He 'rides the wave of crazy and sees where it takes him' 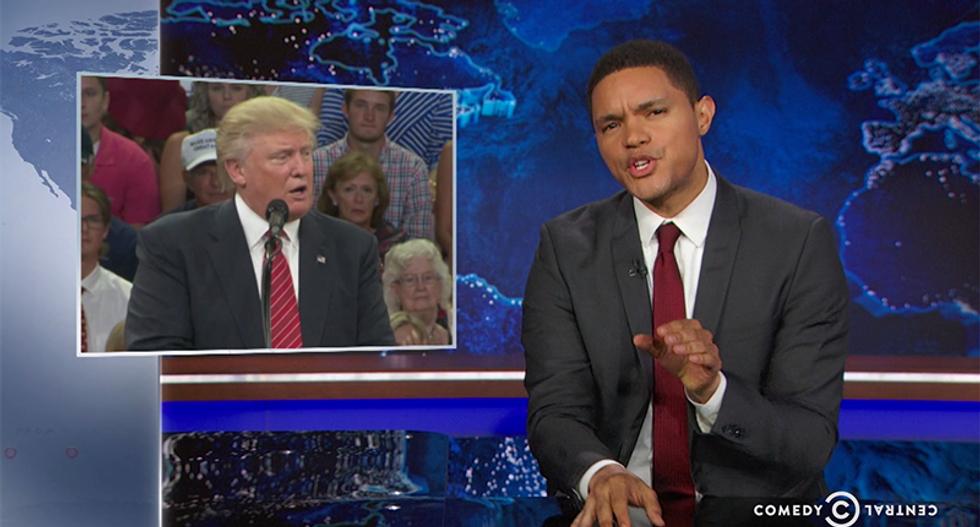 Conservatives were quick to denounce the statement and Trump's own surrogate and spokesperson Katrina Pierson are still struggling to explain it away.

“No matter how many times I watch that I still can’t believe it,” Noah said, aghast. "Donald Trump suggested people with guns 'do something,'" Noah said using air quotes, "about Hillary."

Noah continued, noting Trump's "joke" has “baffled the entire country, especially the Secret Service, who must be thinking to themselves, ‘Are you sh*tting me right now?’ Because think about it, this is the first presidential campaign in history where the Secret Service has had to protect candidates from each other.”

He zoomed in on the older gentlemen over Trump's right shoulder, who we now know is Darrell Vickers of Oak Island, N.C. Vickers can be seen saying "Wow!" and turning to someone on his right to laugh. Noah explained that Vickers' reaction is the white guy equivalent of "oh no he didn't!" You know things are bad when Trump supporters are shocked. "Do you know how hard it is to shock a Trump supporter?" Noah said. "These are the same people who've heard their candidate say 'bing, bing, bong, bong' and thought to themselves, 'That's what we need in the White House.'"

The left says that Trump was making a plea for gun owners to assassinate Hillary Clinton, Trump supporters insist he was just making a joke and everyone in overreacting. No one understands what Katrina Pierson was trying to say. She actually left an MSNBC anchor speechless. "Well, you see, that's your first mistake: Trying to combine logic with the Trump campaign. Yeah, you know who doesn't do that? Donald Trump. He just rides the wave of crazy and sees where it takes him."

He broke it down between the two schools of thought: 1. It was a "wry comment about shooting a future president," or 2. Trump's statement was a call to armed voters to vote, not shoot up the polls. Either way, no one can agree.

“Was it a joke or was it serious?” It made Noah remember the black and blue or white and gold dress that divided the world in 2015. “Every time Donald Trump speaks, it’s 'The Dress,'” he said. “We’re all trying to figure out what the hell it is. And no one can agree, which is entertaining for an Instagram meme but it’s not good for a commander-in-chief.” Noah argued an important quality for a president is that America knows what they mean when they speak. "The last thing you need is a foreign leader going, 'Wait, is he... is he nuking us? Is he nuking...? Unless it was a joke. But, I mean, no president would ever joke about nukes, would they? Is that? Well, better safe than sorry,'" Noah said pretending to turn the nuclear key and press the button to launch.

Typically, presidents need interpreters when they're traveling overseas, "but Donald Trump, he needs one for his own country," Noah said.

Noah showed clips of Trump mocking people, cracking jokes, throwing water all over the stage as he mimicked former candidate Sen. Marco Rubio (R-FL). "You see! He's a standup comedian! We were all spending so much time on his racism, and sexism, and xenophobia and threats to democracy that we missed all the jokes!" Noah explained that the reason we missed it is because he is telling jokes in a place where jokes don't belong.

But if Trump is a standup comedian, his audience should be a comedy audience. However, Noah says they aren't. "Because they think that, for some reason, they've come to see someone that wants to run the country. And they are not joking around." He then showed clips of the threats, violence, insults and comments coming out of Trump supporters.